I have always liked training in lightweight racing shoes and was certainly a minimalistic runner long before the recent fad of runners running in Vibram five-fingers or simply going barefoot. I recently spent a couple of years doing a large portion of my running and racing using  Puma H-Street "slippers"  and have not yet found a trainer that I like running in. I most like doing all my running in racing shoes like the Asics Hyperspeed. Last summer I attempted using trainers again, bulky ones at that, and I don't know if that helped make my hip worse or not. I haven't been able to run since last August due to a torn  labrum in my hip. I will have surgery to repair it next month. I think I always liked minimalistic shoes to help my hip and feet deal with the peculiar imbalances that I have had for years. Hopefully the surgery will clear up my stride and mechanics and let me run pain-free again.

I do think the minimalistic fad has gone a bit overboard, there are some great choices in shoes with a low heel drop and light weight out there now, something that was hard to find up to recently, but I doubt that minimalism and barefoot running is for most runners. It works for some, but many more end up injured.

Which brings us to a newer trend in running shoes: maximalism. A couple of companies are making shoes that oppose the minimalistic attitude with big cushiony shoes that are also supposed to help runners with their stride. The most interesting shoe is made by a company called Hoka One One.The ultramarathon trail-running  crowd seems to be gravitating towards these behemoths of a shoe. I have heard that some claim it is like going mountain biking when you run the trails in these. You can step over and on anything. Running Times says it is like using a hovercraft. Hoka One One claims it is like levitating:

By using an EVA 30% softer and increasing its total volume to 2.5 times that of a typical trail running shoe, we allow for more cushioning than any other shoe on the market today, dissipating up to 80% of the shock associated with heel striking when running. Allowing for as much as 20mm of compression in the heel, with a low ramp angle allows for tremendous confidence running downhill, as runners can now engage their gluteus and lower back as opposed to isolating their quads, relaxing the body and making running downhill


Despite their outrageous clown-sized foot plant they are also very lightweight. The first model made by Hoka One One is the Maffate which is their trail shoe. 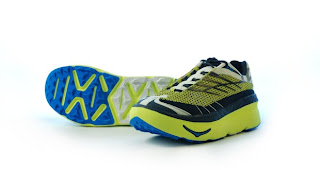 Recently they have come out with the Bondi B which is not as severe a shoe, but still loaded with cushioning and meant to be also used for the roads, Many reviewers say that they can run 20 milers and still have fresh legs that don't feel beat up at all. 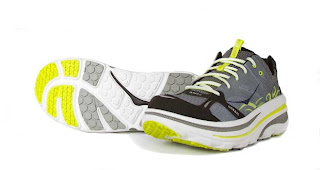 The Hoka One One shoes also have a rocker sole:

40mm high sole design enabled to design a 13cm rockering profile , representing 50% of the sole length. This design allows for fluid and natural stride transitions, lessening the movement of the knee by as much as 20%, increasing efficiency.

These shoes, although silly looking, intrigued me. I thought that the cushioning might be a good thing to have post surgery and the rocker sole sounded interesting for my functional hallux limitis (inability to bend the big toe when pushing off the ground). When I saw a pair of Bondii B's on eBay for far cheaper than the $170 retail price, I decided to get a pair. I am hoping that they may help me recover and get me back running much easier once I have recovered from my surgery. Now that they have arrived and I have put them on my initial reactions are 1) they are very big looking 2) they are very lightweight 3) boy, they are really cushioned, like walking on marshmallows 4) they seem a bit unstable walking around and 5) I think these might be very interesting to run in - I am not at all put off by them (usually a cushioned bulky shoe drives me nuts right when I put them on  6) I am going to try walking around in them - I really wish my hip let me run!

Ultramarathoner Karl Meltzer ran an average of 51.6 miles a day on his 2,064 mile journey across the historic Pony Express trail from Sacramento California to St. Joseph Missouri using 7 pairs of the Mafates.

Another recent running shoe that seems to be anti-minimalistic is the Mizuno Wave Prophecy seen here:

Mizuno says this of their shoe:


The result of seven years of intense research and development, Wave Prophecy is our most advanced, most dynamic shoe ever. Our engineers designed Wave Prophecy to match your running gait and the natural spring rate of your muscles and tendons. Whether you land on your forefoot, midfoot or heel, Wave Prophecy’s full-length Infinity Wave plates propel you forward with a smooth ride mile after mile. No matter how far and how often you run, you’ll always have the ride of your life.


This review on Ransacker mentions that:

Probably the most eye-catching and controversial design feature of the Prophecy shoe is the sole. It is almost completely separate from the rest of the shoe, connected by rubber posts. This creates 4 large holes that run right through the sole. A friend of mine joked that you could store your energy gels in there. The sole itself is shaped by the famous Mizuno “Wave.” This runs through the whole shoe and not just part of the sole as with previous Wave incarnations.


There you have it, you can go minimalistic or you can go maximalistic. The choice is yours.
Posted by Jim Hansen at 3:17 PM 5 comments:

When the names of greatest runners from the 1980's are mentioned, there is quite a list of runners to discuss. One runner that may be overlooked is the British marathoner, Charlie Spedding; however to overlook his achievements would be a mistake. Who, you say? Unless you are a true fan of the sport, the name might not ring a bell, but just take a look at his marathon record:


Charlie Spedding has an Olympic Bronze medal and a 6th place Olympic marathon finish, wins in London and Houston and other impressive finishes and times. He still holds the English marathon record of 2:08:33 set in London in 1985-Steve Jones (from Wales) set the British record by winning the race. Got that? A runner of this caliber certainly begs a bit of study, and fortunately Charlie Spedding himself has written an autobiography chronicling his running career. He describes himself as someone without much talent, so he must have done something right to reach the heights he did. He spells out the secrets to his success in his book From Last to First

The book is a compelling read, but not just because it is interesting to read what is going through his head as he runs the Olympic marathons and other races. He had a deliberate plan to bring a positive mindset to his racing, and it worked very well. Charlie Spedding could be called one of the all-time great peakers, because the bigger the race, the better he ran. Charlie could sense that the highly touted runners like Rob DeCastella did not have a winning attitude as they started and ran the Olympic races as favorites and thus they never got the medals that others predicted they would win. On the other hand, Charlie looked for the positives and produced when it most mattered. This unfortunately led to his demise as a professional runner, as he couldn't muster the mental focus to cash in on his marathon successes after the fact. He could prepare himself for the big races, but that meant he couldn't run the smaller races with the same mental and physical peak.

"The better I became at digging deep in a major race, the less able I was to run hard in any other event. I tried to do my best, but I became less and less able to produce a performance if a race didn't matter to me"

If you enjoy a well-written book and want to learn about one of the marathon greats, then this book is for you. You might also pick up some tips on how to mentally prepare yourself to be the best runner that you can be. One of my favorite running quotes (I listed it in my high school yearbook) comes from Frank Shorter, "...to me the object is not to beat someone, but merely to live up to your potential. If you do this, then you will end up winning a lot..." Charlie had a similar mantra, that he wrote down in his notebook at the start of his quest to become a champion, "Success is measured by how much I fulfill the talent I was born with." Charlie Spedding was a successful runner by all counts!


New England runners got a closer look at Spedding before both Olympic Marathon races as he trained and raced in the Boston area leading up to both races. He also ran the Falmouth Road Race twice: finishing in 9th place in 1981 and 30th in 1988.


"I achieved my targets because I knew what I wanted. I knew why I wanted it; and I knew how much I wanted it.I also stuck to it when things went wrong, and I wasn't distracted by other things that came along."

Charlie Spedding on his greatest moment in running (a moment that all runners have dreamt about and that Charlie lived) :


"...the question usually includes a choice between winning the London Marathon and being third in the Olympics. Both of these are very high on my list, but neither is my greatest moment....My reply would often cause surprise because my greatest moment was not a result, but a spell of running which lasted about five minutes. The greatest moment in my two decades of running came 22 miles into the Olympic marathon when I took the lead and pushed the pace. After all the setbakcs, injures and failuresm I was living the fantasy that every distance runner has on a long, cold winter run, I had the initiative. I was calling the tune. I was grasping my opportunity with both hands. I was taking part in Olympic proportionsI was running as fast as I dared. I was trying my upmost to fulfill my wildest dreams. Today was indeed the day. I was doing it. I was flying and I felt absolutely fantastic."

Check out the 3:05 mark in the Olympic marathon video above for this moment.

Here is an interesting interview with Charlie from back in 2003.
Posted by Jim Hansen at 9:08 PM No comments: