Sunday, I competed the Mount Washington Hill Climb along with two other ElliptiGO riders and about 600 cyclists. This was a huge challenge and I am happy that the event is now over. I drove my van up late Saturday night and slept a few hours in it across the street from the start.  That allowed me to wake up early to the moon shining down on the start of the Mt. Washington Auto Road. 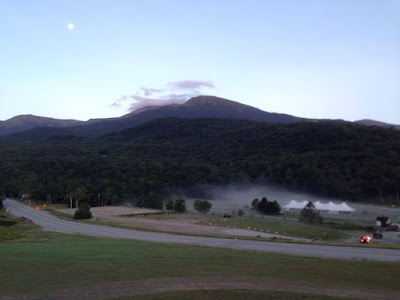 I had done the practice ride up Mt. Washington in July and so many things went wrong. It was a good learning experience. The next couple of weeks I was fixing things on my ElliptiGO. First, the bolts on my rear axle were loose and my rear tire was rubbing at times throughout that ride, It drained me physically and I had to stop at 4 1/2 miles to borrow a tool from someone in a car to try to fix it. That only helped a little and I had to walk parts of the way to the top. I realized that this was now a huge undertaking, but I had to fix my ElliptiGO before the race. I first got the axle tightened, but I still was experiencing friction on my rides until I realized I needed a new bottom bracket (I have 19,000 miles on my ElliptiGO). I got that fixed and then I realized I needed new tracks and load wheels. My ElliptiGO rode so much better with these fixes.I was putting in great mileage (up to 250 miles/week), but preparing for the nonstop climb is something different. I was very nervous going into this race.

The morning of the hill climb, I met up with fellow GOers, Andrew Warby (who I have previously ridden a century with as well as the midnight bike ride from Boston to Hopkinton and back the night before the Boston Marathon this year) and Jim Cremer, who drove out from Iowa just to ride the hill.

They would be starting in a wave 5 minutes before my start. As you can see it was a beautiful day to ride up the rock pile. When I first started planning this ride, I thought it would be nice to get the ElliptiGO record for climbing Mt.Washington. Only two people had done the ride on an ElliptiGO before and the record is 1:54:22 by Bryce Whiting during the Newton's Revenge race in 2010. After the practice ride, my new goal was just to get up without dying or walking. The record was still in the back of my mind, however. I did the practice ride in 2:20, with walking-which is not much slower than riding- and while trying to fix my ElliptiGO. I realized I would need to have an average speed of around 4 mph to do this. 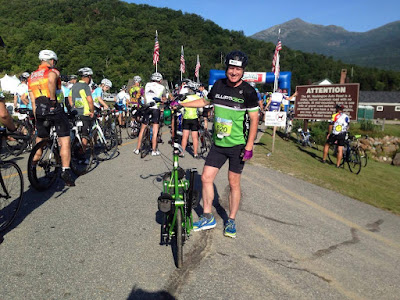 After a short easy section of about 2/10ths of a mile, the climb is nonstop with an average grade of 12%. I tried to get into a rhythm and things were going pretty well. My heart rate was calm enough and I was staying over 4 mph for the first half of the climb. I had to stop once, when a cyclist fell right in front of me, but I was able to get going. He was very apologetic and offered to push me, but I got going on my own. He was not the only cyclist I saw tumble over.

At 4 1/2 miles, I hit the dirt road section of about one mile. During the practice ride, it was pretty much impossible to ride this section as it was raining and the dirt had the consistency of wet peanut butter. This day it was dry and I was able to power right up it. I did start noticing a grabbing at my back wheel every once in awhile at this point (usually when I shifted into a higher gear) just like during the practice ride, but it would let up if I shifted the angle of my wheels to the ground or shifted to an easier gear.

I was very pleased to not stop and dismount at any of the really steep grades. Looking up ahead at a wall of road rising in front of me was very unnerving, so I tried not to look and just kept my head down on the steepest climbs. The problem with this course is that there is no place to recover or relax. You can't let up anywhere to catch your breath. When the grade was between 8-12%, I felt my best as I could move up a gear or two and try to get my average speed up.

Miles take forever when you are going so slow, but eventually I neared the top. The steepest section is the corner right before the finish line. They say the average grade here is 22%, but during the practice ride, my Garmin shows at least one bump at 39%. I went wider around the corner this time and it still registered 37.5%. But, before I got there, I was doing great with my plan of riding all the way to the top without walking. 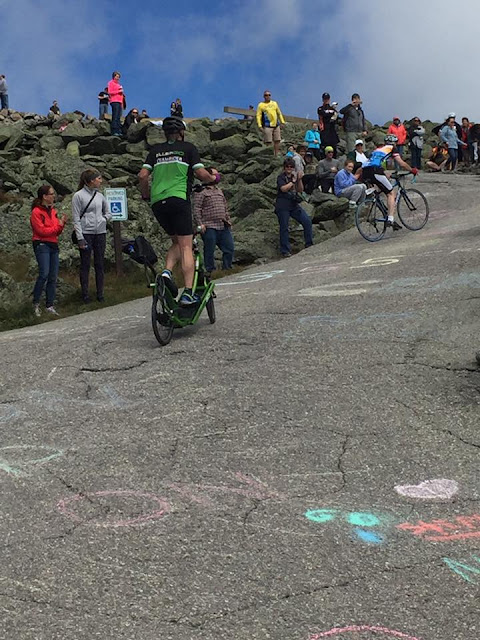 As you can see in this photo, I am almost to the corner, but shortly after this photo was taken, I had to dismount and walk before I got back on again and finished.

I finished the ride in 2:06:17 for an average speed of 3.6 mph. I am the slowest of all five people to have ever ridden up Mt. Washington on an ElliptiGO, so I will go with being the oldest and only ElliptiGO rider from New Hampshire to ride up that beast of a hill. Andrew Warby was the first finisher in 1:56:27 coming close to the record and riding at 3.9 mph. Jim Cremer finished in 2:00:49 before jumping back into his car for the long drive back to Iowa. It was a great day for riding and for the ElliptiGO riders, proving what a versatile machine it is. Here is a video I took of the start and then the final few miles. You can scroll quickly through it to get a feel for the climb. Sorry for the smudge on the camera lens! At 8:00, I lose concentration and almost veer over the side, at 28:00 I go flying by some hikers, and at 36:00 starts the drive to the finish.

Here is an article on my climb from the Nashua Telegraph.

Here is my Strava map of the climb. 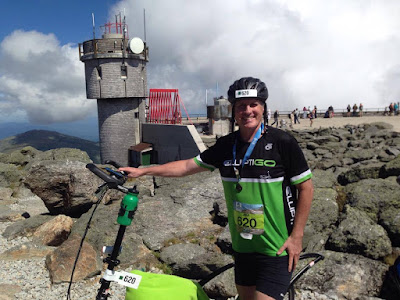 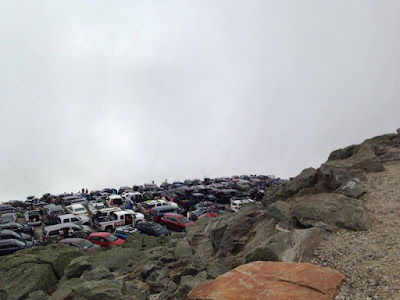 If you must, you will need to change your gearing. Talk to Keri at ElliptiGO.
I used a 130 chainring and a 20T cog, I have an eight speed. Jim and Andrew had 11 speed GOs so their gearing would be different. Jim Cremer says he used a 38 tooth chainring and the stock sprocket on his 11 speed. He used 1st and 2nd gear most of the time, with 3rd and 4th once in a while on the rare brief mini-breaks. Andrew used a 42 tooth chainring. It still allowed him to get some speed on the flats and he kept it on for several months prior to train with it as much as possible. Note, I tried riding on regular roads with my setup, but it was nearly impossible. All of my 8 speeds were too low and unless I was going downhill, I could barely get over 10 mph, no matter how fast I was spinning,

Make sure your ElliptiGO is ready for the challenge. Mine was not for the practice ride, and even with all the repairs I made, my rear wheel was still off a bit during this ride. I should have had a professional mechanic go over it.

I did not use a heart rate monitor. I was scared of my heart rate being too high due to the practice ride and also some rides up Pack Monadnock. I think I kept it in an acceptable place the whole ride, so I am happy about that.

You can never build momentum on this ride, if you don't move, you will stop!

I think it would be best to lose as much weight as you can before doing this ride. I was no where near my former running weight. My ElliptiGO weighs 42 pounds so that is a disadvantage when compared to cyclists, whose bikes weigh 1/3 to 1/2 of that.

I found that on my eight speed that in the lowest gear, I could not really get over 4 mph, but you need that gear where it is steep (and that is most of the way). The second lowest gear would keep me around 4 mph. The next higher gears did not get enough use, but when they did, I could go faster. There just wasn't enough time to keep those gears engaged.

I brought water, but did not drink it while riding. I would have to stop pedaling to drink and that would cause my ElliptiGO to stop or fall over. Drink a lot before your ride. Wear sunscreen, I did not, and got sunburnt a bit.

You cannot ride an ElliptiGO or bike down the hill. You will need to find a ride down. This is not hard. Jim and I both found rides down the day of the ride.

Here are three recommendations from Andrew Warby to anyone who wants to attempt the climb in the future:

1) Gear down to something that will give you a level of resistance you are comfortable with
2) Maintain an even effort
3) Do the practice ride the month prior. It will help you know what to fix.

I am not sure which is more grueling running or riding up the mountain. They both are intense. Twenty years ago I ran up the hill in 1:22:23, which is my best running time.

Here is the strava file of my practice ride.

Posted by Jim Hansen at 12:01 PM No comments: Links to this post