To Live up to your Potential

"...to me the object is not to beat someone, but merely to live up to your potential. If you do, then you will end up winning a lot..."  Frank Shorter

Back in 1977, when I graduated from The Stony Brook School we could put a quote or two by our yearbook photo. I found a running quote that also was a life philosophy quote from Olympic 1972 gold and 1976 silver medalist in the marathon, Frank Shorter. I included this quote and I frequently recall it to help me pursue a proper "winning" attitude. I couldn't remember where it came from, until I recently found the original article again online in the May 24, 1976 Sports Illustrated article, "In the Long Run it's Shorter" by Frank Deford. This is a great article. 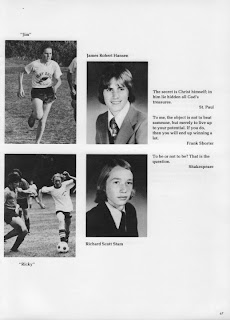 I also recently discovered that a classic running book from 1980 titled The Marathoners by Hal Hidgon has been released for the Kindle. I borrowed this book from a library many years ago, but it was nice to find the Kindle version for just $2.99 and it was worth a reread. It highlights the stories of Frank Shorter and his victory in the 1972 Olympic Marathon as well as Bill Rodgers and his 1975 victory in the Boston Marathon. These two runners and their standout feats lit the fires for the running boom in the 1970s. They are two champions of the sport.

Hal Higdon then tells about the women responsible for challenging the norms of the time concerning women running marathons. In particular he highlights Gayle Barron who won the 1978 Boston Marathon. She may not be as well know today, but she epitomized the female pioneer runners and marathoners of the 1970s who kept stepping forward to win races and bring down records.

Gary Bjorklund was another great track and marathon runner from the 1970s; one who was eager to replace Rodgers and Shorter at the top of the running  pack.He is well known for making the Olympic Team in the 10000 meters in 1976 despite losing a track shoe in the race.


If you want to learn some great  running history or be inspired again by the racing of these great runners, then I suggest you read this Kindle book.

On another note, of the numerous emails and notes of support I received back in 2000 during the hullabaloo when the Nashua School Superintendent would not let me take a personal day to run the Boston Marathon, I recall that one of the emails sent my way came from Hal Higdon himself!
Posted by Jim Hansen at 11:45 PM