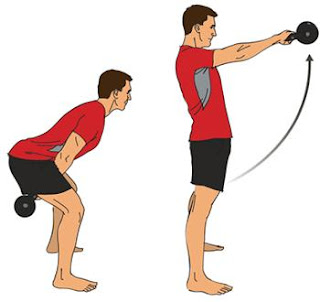 I can't believe that it was the end of August when I had to stop running. I got a few training runs here and there in as I kept testing things out with my hip as well as two 5ks in the Fall, but there was nothing I could train for without my hip hurting, and the only goal was to figure out what was really wrong with my hip. It has been almost two months now since my last attempt at running. That is the longest I have gone without running a step since I began running in 1973. With the warmer weather I had at least hoped that I could do some cycling. I found I could cycle pretty much pain free, but that if I did, the next couple of days would be really painful with what I think is an irritated nerve on my left side. That means there is not much else I can do for exercise without bothering my hip. Fortunately I did find I could do kettlebell two-handed swings (doing one-handed swings put enough torque on my hip to cause irritation). So in the last few months I began swinging, I went from a 35 pound kettlebell doing about 100 swings max on a good day to using a 50 pound kettlebell and reaching a goal of 1000 swings (not continuously but with breaks like doing intervals on the track).

At the end of last month I learned of a kettlebell  30 day 10,000 Swing Challenge for the month of April. I decided to join in and was thrilled to have some training goals. It was just the push that I needed. Well today I finished my 10,000th kettlebell swing of the month and I am sort-of-sick of doing them, but very happy that I could complete some sort of athletic goal for the first time in months. Doing lots of swings can be very monotonous and boring, but it is at least doing something. They get the heart really pumping and the lungs really working like when you are doing a good hard run, however I miss the feeling of the wind in my face and the changing ground underneath my feet. It is also weird to be feeling that my arms and shoulders are becoming the fit parts of my body and not my legs, even though the swing is a whole body exercise. Holding onto the kettlebell was a lot harder a month ago, but my grip is much stronger now. I also find it funny that my hands were getting blisters instead of my feet.

Last Saturday I also thought up my own challenge within the challenge and did what I am now calling a Kettlebell Swing Marathon. To complete the marathon you have to complete 2620 kettlebell swings in one day. The number comes from the fact that a marathon is 26.2 miles long. Let me tell you that was one long day! The most swings I had ever done in a day was 1300 so it doubled my previous best day. The last 600 swings were mentally very similar to the last 6 miles of a marathon. It would have been very easy to give up and call it a day, and I was getting fatigued, but I was still able to keep good form and press on to reaching my goal. I doubt I will ever try that again in my life, however! I did this kettlebell marathon with the 50 pound kettlebell.

Throughout the month I used the 50 pound kettlebell for the high repetition days. On the easier days I used the 35 pound bell at times. I like my 50 pounder better as the handle is wider to fit both hands. The handle on my 35 pounder is thicker and doesn't have quite enough room to fit a full grip with both hands which makes it uncomfortable for a lengthy swing session.I did intervals of 25 -50 with the 50 pound bell and intervals of 50-300 with the 35 pound bell. Here is the progressions I did. There was no rhyme or reason to my training, if my hip felt good I did more, if my hip was sore I only did a few or none at all. I missed more days than I would have liked, but some days my hip wasn't feeling up to it. The kettlebell marathon day also took a bit out of me and I put off those final swings.

Next week I finally get to go and discuss my labral tears with a doctor and find out if and when I can have surgery. I am not sure when I will have the chance to run again. The best case scenario would be the fall, the worst would be a year or so, and I can't even contemplate being told I can't run anymore! I am just so excited to finally get going on taking the steps to finally fix my hip.
Posted by Jim Hansen at 12:28 AM

Did your body shape/size change over that month at all?

Did your body shape/size change over that month at all?

I didn't really notice. My arms, shoulders, upper body, and core got stronger but I am a runner and had gained too much weight and that is what I was noticing since I was not really running over the previous months due to that labral tear.

Thanks for sharing this! And congratulations to finishing! I completed the challenge just last week and had a very similar experience. It was gruesome but not only physically.

With some distance to it, you still think you won't redo it? :)

Congrats! I started redoing the 10,000 swings a few times, but haven't had the same enthusiasm to carry through with it yet!