I have had my Centurion Cinelli  Equipe road bike since 1985 when I bought it at the Internationl Bicycle Center in Boston. It had a list price of almost $1000 back then, but I bought it for $700. It is a solid and beautiful bike, built in Italy by Cinelli for the Centurion brand. I looked on eBay and the last price someone sold one for was double the price that I originally paid. Mine is not for sale as it is still my main road bike and I am not upgrading. I spent so many miles riding this bike through the years that it is like a best friend to me. I recently saw a post that gave more specifics for the bike at the Cinelli Only blog which also had an article from Bicycle Guide on the bike. that I use to have, but have somehow lost.

I thought I would put up a few pictures that I can find of the bike through the years as the author of that blog post has asked for pictures of this Centurion model. The first bicycle I bought for racing triathlons in 1983 was a $300 Centurion Elite. That September, I competed in my third triathlon, which was the 1st Cape Cod Endurance Triathlon (a full Ironman distance triathlon). I used that bike the next year for more triathlons including the 2nd CCET, but bought the Centurion Cinelli Equipe for the 1985 season and used it in all future triathlons including my 3rd -5th CCET races from 1985-1987. I stopped doing triathlons at that time due to a "bad back", but spent the next couple of years racing my bike in local time trials, criteriums, and road races. Now that I had hip surgery last summer, I think my "bad back" was caused by a bad hip as I feel more comfortable on my bike then I ever did back when I was racing. It is fun to train again on my sturdy and quick Centurion Cinelli Equipe! I have only seen one other model of this bike. It was being raced by Donnie Lake, one of New England's top triathlete's in the 1980s.

Here is something I did not know. A Centurion bicycle won the Ironman Triathlon in 1982 in Hawaii. Here is a photo of Linda Sweeney's Ironman winning bike as seen on twitter by Lucas Verzbicus. He says it was made from aluminum, but it is a steel framed bike. 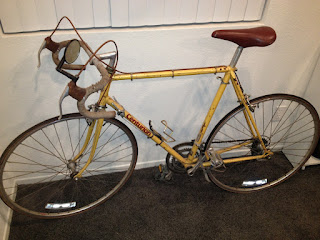 She only used two gears during the bike ride and had a basket on the front to keep her towel, her cassettes and her cassette player. White Punks on Dope was top of mind. From  reading the materials, Linda Sweeney thought the Ironman course in Hawaii was totally flat. Not quite. It’s hard to believe it has been 30 years since Sweeney won her first- and only- Ironman race.

From this article her boyfriend the Thom Hunt, former high school indoor mile record holder and American 10,000 meter record holder bought her the Centurion for $350.

This is my wife's Centurion Lemans 12 road bike. She never got into cycling. She bought this bike on my recommendation around 1985. I made this mistake of taking her out for her first ride on a 25 mile route through the hills of Vermont. She was not happy and did not want to become a triathlete (I tried), thus this bike has been toted from garage to garage. It is still all original. We may not have it much longer as we have put it on Craigslist for $100, but it is another in the line of Centurion bicycles. 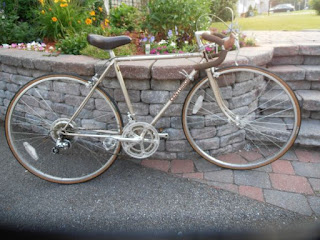 I recently purchased a Centurion "Cinelli" Equipe off CraigsList and it is in original, stock condition - save for the brake levers. What a wonderful bicycle. So unique and the ride is responsive and smooth. I'm trying to find all the owners of this bicycle to get a count. My guess is there may be as many as 50 still floating around, but probably less. Thanks for your post on this great bicycle!

Tom, That is very cool that you found such a great model of the bike and enjoy it so much. My wife still has her Centurian LeMans from the 1980s that we bought, but she did not take to biking so everything is still original on that bike. I recall years ago hearing somewhere that there were only 17 or 19 of the "Cinelli" Equipe made or sold. Obviously that is wrong. I wish I remembered where I heard it. Maybe it was how many where sold from the bike shop I bought it from, but I can't recall. I bet I have all my original worn out parts still somewhere, but I am not an upgrader or restorer. I just ride the bike! Maybe when I can no longer ride I could try to restore it to its original condition. Thanks for responding to the post!

I have a 100% original Cinelli Equipe and I would like to sell it. I can be reached at rickh15@msn.com

Rick, do you have a photo to show what it looks like?

What does a centurion cinelli equipe go for these days???

There are two on eBay now. Neither has received a bid, but they are asking over $1000 and trying to get around $1500 it seems. The first looks like it has most of the original parts: http://www.ebay.com/itm/Cinelli-Equipe-Centurion-54cm-Road-Bike-Vintage-Excellent-GREAT-GIFT-/121594227521?pt=LH_DefaultDomain_0&hash=item1c4f94ab41 and http://www.ebay.com/itm/vintage-rare-Cinelli-centurion-53cm-campagnlo-record-nuovo-brooks-super-champion-/181685790201?pt=LH_DefaultDomain_0&hash=item2a4d5125f9