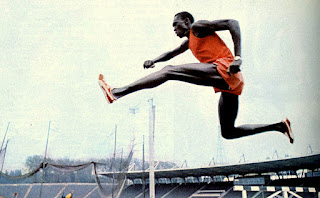 
At the Munich Olympics of 1972, John Akii Bua, from the impoverished African country of Uganda, powered round the inside lane in the 400m hurdles, past the English favourite, and reigning Olympic Champion David Hemery, to win the gold medal, 10m clear of the field. John Akii Bua had become the first African to win gold in an event under 800 metres. He was also the first man to break the 48 seconds barrier in the 400 metre hurdles, an event so gruelling its nickname is 'The Mankiller'. This is the story about that amazing triumph - and what happened next. David Hemery retired to respectable fame and fortune, later becoming president of the UK's athletics federation. John Akii Bua returned to a Uganda carving the name of its military "President", Idi Amin, into genocidal notoriety. This is a film about the pinnacle of athletic achievement - and the search to discover what followed. 'The John Akii Bua story: An African Tragedy' is the story of one man, and of Africa itself; its glory, potential - and tragedy.


If you ever get a hold of this classic running book Best Efforts: World Class Runners and Races

by Kenny Moore, there is a chapter on John Akii Bua as well as other great runners.