Lolo Jones and her toes! 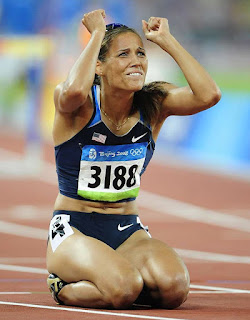 You hear a lot about Lolo Jones these days and not even coming from her track and field fans. She is one of the true celebrities of the sport. Who can forget her crash in the 2008 Olympic Olympic finals?

Sport Illustrated has a new article called "Wired for Speed" (similar but not the same as this article) in their current issue on Lolo Jones and the technology that she is using to help her get to the London Olympics. I found this passage interesting:


Jones doesn't particularly enjoy reliving the 2008 Olympic final. But she has seen replays of the race, watched her lead foot clip the ninth hurdle and jolt her back from first to seventh place. She cannot be sure what went wrong; it could have been any number of things. But her doctor's theory is that it was an early manifestation of tethered spinal cord syndrome, a congenital neurological disorder that limits the movement of the spinal cord. After Beijing, Jones was hitting hurdles in races more often and experiencing debilitating back pain, which led her to see Dr. Robert Bray, a neurological spine surgeon based in Los Angeles. Bray recognized a telling symptom of the disorder: the loss of position sense in her feet. Essentially, Jones was running without knowing exactly where her toes were. An MRI revealed the condition, and last August, Bray operated on her back.

Good luck to Lolo. I have never heard of tethered spinal cord syndrome, but despite the disorder, it shows the importance of knowing where your feet are on the ground and the importance of your toes while running (and hurdling). Lolo is another Recover Your Stride hero!

Update: Actually I have heard of tethered cord syndrome. I should know better, but I forgot the name. My teen-aged daughter had spinal surgery 2 years ago to remove a cyst in her lower back and is now receiving PT for, "tethered cord syndrome". She is hoping to play field hockey this fall in college. The PT was amazed that she was able to play in high school. She is doing lots of core work now to rewake some of the nerve pathways. I guess that means my daughter is a Recover Your Stride hero too.

Here is a video and article on the movement analysis technology that Lola is using.