Hot, Hot, Hot at the Moose on the Loose 10 Miler 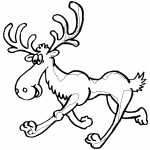 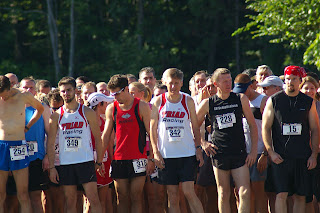 Today I ran the Moose Milers 10 mile trail race (results) in Mine Falls Park. It was hot (in the low 90's) and humid and was not a good day for racing. I spent the last two days getting Andrew situated for his first year at Gordon College and so I didn't run or think about running for those days. I woke up this morning not sure what I could do.

I have been feeling pretty good and experiencing a lot of changes from doing plenty of Feldenkrais exercises. I am running better most days, but some days my body is a bit confused such as on Wednesday during the track workout. It was hot and humid and we were to do 5 X mile. For the first mile I realised I didn't have a group. I ran with a new guy named Juan with limited English skills. I took him through the 1/2 in under 3:00 but then he passed me and moved away. That was the only one I ran under 6 minutes. I ran the second with him, but he moved away even quicker. His fifth mile was done solo in 5:00 flat as he got faster each interval. I tried to find another group to run with as my hip was bothering me and my running had no flow. I joined a group but they kept starting without me. I did two intervals sort of with them, as again I was on my own. My hip was sore and I was limping, so I stopped. I worked on stretching and relaxing for over 20 minutes before doing the final mile on my own. I wore the Vibram Five-finger shoes for this one. My stride was a little better and I liked running on the track with those funky shoes.

Unfortunately I had the same hip imbalance again today, but you can't stop and fix it during a race. Because of this I started much slower than normal and couldn't get comfortable. There are four 2 1/2 mile loops in this race. I only caught my 5 mile split. It was 34:21. It was hot and ugly out there and things still weren't improving, but I remembered putting in the extra mile on Wednesday when I wasn't feeling good and had at first ended the workout prematurely. I told myself that this would be when that extra effort would pay off. I was able to keep up the same awkward pace as other runners kept dying off around and in front of me. I passed quite a few runners the last two laps and was never passed once. I finished in 1:08:44 so I had pretty much even splits. If I didn't stop at the cones instead of running to the clock it would probably have been even splits exactly. 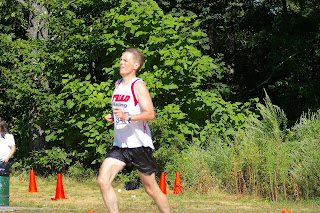 The race was hot! Many runners were slowed by the excessive heat. I was soaked with sweat that wouldn't dry off by the end. My hip was real sore and I was limping around for a couple of hours. I felt good that I didn't fall apart in the heat. I accept the fact that my time was slower than I was capable of, but that was more to do with an awkward stride. I do have some ideas of what movement exercises I should do to rebalance things again.

The Gate City Striders cleaned up with points in the New Hampshire Grand Prix. I ended up 5th in my age group, well really 6th if you count Cathy Merra's amazing run. Another great run was put in by Rich Stockdale. The guy is 58, lost 10 pounds this week on a funky diet that I don't understand and I did not pass him until the 180 degree turn on the last lap.

Photos of the race by Ethan Platt.
Posted by Jim Hansen at 10:15 PM

Nice job nonetheless, Jim! I've been running in the Five Fingers for a couple of weeks and have really enjoyed them. Unfortunately, I shredded my pair on a hiking trip and then an intense trail race. Fortunately, my brother works for Vibram:)

Just a couple of weeks and already using them in trail races. That is pretty good!