Can you keep up with Ryan Hall?

Asics has come up with a new way to get the ordinary runner or spectator to appreciate how fast a world class marathoner runs. Here is the Ryan Hall treadmill. Can you keep up?

Posted by Jim Hansen at 6:21 PM No comments:

Here is a recently uploaded documentary from Australia on the great Ethiopian runner Haile Gebrselassie. His story has been told many times, but it is still fun to see some of his first major races such as when Joseph Machuka of Kenya hit Haile with his fist as Haile went sprinting by for a win or another sprint win against an angry Moses Tanui and his shoe. It is nice to hear Haile's inner voice and thoughts and to hear about his race tactics and injuries as he narrates the film.

Posted by Jim Hansen at 6:57 PM No comments:

Here is another wonderful vintage video which was just uploaded to youtube. It may be the last ever video taken of Abebe Bikila running as he finished 2nd in the 1969 Seoul International Marathon. The race was held in March of 1969 and it was on March 22, 1969 that Bikila was paralyzed in a car accident. The winner of the marathon was Song Keum-Yong of Korea in 2:20:28. Bikila finished in second place and it looks like he ran the race barefoot.

Posted by Jim Hansen at 7:28 PM No comments:

In the year before winning Olympic Gold, Frank Shorter won the Pan Am Games Marathon held in Cali, Columbia. Frank had won the 10,000m race a few days earlier and was facing stomach problems throughout the race (see what he does upon finishing), but still took home the gold in 2:22:40. The video shows some of the congestion and conditions which is mentioned in this 1971 Sports Illustrated article. As usual Frank looks as smooth as silk!

I just noticed this video that was uploaded to youtube today. I have never seen much footage of Amby Burfoot running in the 1969 Boston Marathon. That 1968 race was the first time I decided I wanted to be a marathoner. I was in third grade.

Here is an article where Amby describes his Boston Marathon win.
Posted by Jim Hansen at 2:56 PM No comments: 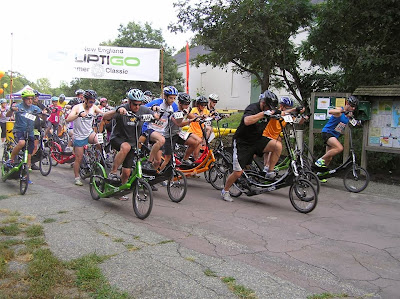 Here is a really neat video of the End of Summer Classic races held in August, including the first ElliptiGO race ever held on the east coast. Dragonfly Aerials used an aerial drone to take some of the shots for this video. After the ElliptiGO race is shown, the video for the running event has some wonderful shots where the sky is reflected in the water which when coupled with the sharp shoreline makes it appear to be filming the edge of the world. Here is my race report on the End of Summer Classic with another race video. You can also find out who won this race. In the photo and video, I am on a green ElliptiGO with a gray shirt and a light blue helmet. It was a fun event and I have been looking forward to seeing this aerial drone video. Pretty soon ElliptiGOs will be everywhere and everyone will want their own aerial drone video cameras. Just wait to see what happens when moms and dads want to video their kid's soccer games! Anyhow there was some cool technology both racing and filming that evening!

Attacking Pack Monadnock on the the ElliptiGO 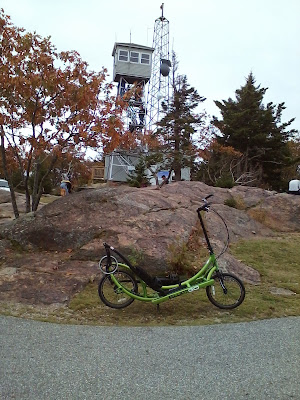 Last Saturday, I decided to ride my ElliptiGO up Pack Monadnock. I had been thinking about trying this all summer, but my thoughts were more about riding out to the mountain from my house on my ElliptiGO and then going up it before heading home (maybe a 5-6 hour day). Then I saw that the new ElliptiGO convert and running beast Dave Dunham rode the Pack Mondanock 10 mile road race course to the top a few days earlier on his GO and I was inspired to try it myself. I set a goal of trying to beat my best time in the race set back in 1996. Coincidentally, Dave won the race that year, but he has won tons of mountain races including Mt. Washington three times and has a recent 11th place finish in the Masters World Mountain Running Championships held in the Czech Republic back in September. He is also frequently injured, hence the wise choice of getting an ElliiptiGO.

I had three things I was worried about before attempting this challenge: number one, I might get lost and take a wrong turn on back roads I am unfamiliar with: number 2, I might not be able to make it up the mountain (the last 1.3 miles are as steep or steeper than Mt. Washington), and 3, riding down the mountain might be treacherous. I decided to dive in anyhow and parked at the base of the auto road to pay the $4 to climb the mountain. Then I took a set of directions I had printed and rode the course backwards trying to navigate and remember all the corners for the return.

I thought I had the course correct, grabbed some water and started where the 10 mile road race starts. When I used to run this race, I always ran it as a tough 8 1/2 mile road race. I would ignore the thought of running to the top and ran as hard as I could knowing that the last bit would be slow going anyhow. I used the same tactic on my ElliptiGO. The first mile is hilly with some uphills that sent my heart rate soaring where it stayed the whole ride. I tried to look at my route directions, but had to rely on my memory due to the effort I was putting in (for the same reason, I drank no water). Unfortunately, at around 3 miles I came upon an intersection and realized I had added some extra distance to the ride as I entered from a different direction. I thought about turning around and starting again, but I was already using up my energy and didn't want to face the beginning hills again. My enthusiasm was dulled a bit because of this mistake, but this was supposed to be fun, so I just soldiered on.

There were a few dirt roads to navigate and I kept on the course expect for one bad turn and I had to go around an island in the road to turn around and lost about 20-30 seconds. From there on it was just keeping going as hard as I could until I made my way to the parking lot at the base of the mountain. I rode right by the gate and started heading up. After a few minutes a car went by and I heard someone cheer, "Go Jim!" I couldn't tell who it was, but I knew it was a runner due to the stickers on the car. Now I had to make it to the top. At first it was easy going, and then I hit even steeper sections. 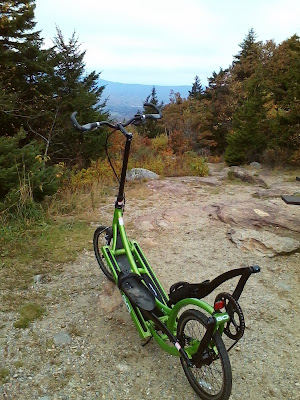 I don't know what was worse the steepness of some of the road or how hard my heart was beating. As I neared the top to the steepest part (over 20%) I could barely move. I looked up at the wall of road ahead and above me and nearly died thinking about getting up it. After awhile I had to stop and walk part of the steep section due to my pounding heart more than the slow progress. Still I broke my best running time on the course from 1996 by over 6 minutes, which was my goal. GPS says 11.10 miles in 1:07:18. If my GPS is correct I added an extra mile to the course. I found an old running friend Chris Poulous at the top and it turned out the Ranger taking money at the bottom was a former neighbor from years ago. Chris was paying money to her when I went by and in the ensuing conversation, she figured out that she knew me. As I had feared, I got lost and also had to walk. On the other hand the ride down was a blast!


When Dave did the ride a few days earlier, he started before dawn and the road was dark. He rode out on the course and back and then did the whole thing over again on his mountain bike. He called it one of his hardest workouts. This coming from a workout king. I just did the ElliptiGO portion. It was tough, but I don't think I completed my mission. I need to get to the top without walking next time-if possible. I may even ride a dual assault on Pack Monadnock with Dave real soon early one morning if the weather cooperates.

This week is the ElliptiGO World Championships. They ride up Mt. Palomar in California. We need an east coast version. Pack Monadnock would make a killer course! 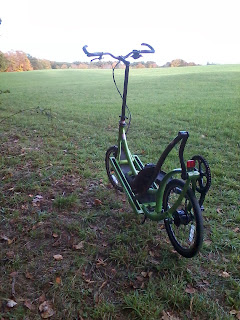 Most of my weekday rides now are about getting home before it gets dark. I am starting to run (patiently). I have only run a total of 8 miles since getting the ElliptiGO. I did four 2 mile runs. Each run felt OK except for twinges in my glutes and muscles around my hip. Each run left my left side sore for a couple of days. My new goal was to only run until the muscles in my hip rebelled. I made it 92 seconds the first day and then the glutes started clamping shut around the hip joint so I just stopped). The next runs I got to 5 minutes (around the block) and stopped with no problems during the run or after. 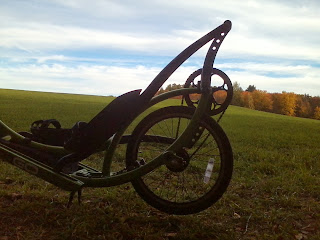 Posted by Jim Hansen at 4:24 PM No comments: