Last Saturday, I competed in my first obstacle course type race at the Reviver Challenge in Cumberland, Rhode Island. It was a short enough run (2.5 miles) that I knew I could do it, although I had no idea about doing the obstacles. I have only run 4 miles (2 last week) since my last snowshoe race, so I was hoping that the ElliptiGO miles I have been doing would pay off.

I had a special reason for doing this race, last year my sister Joy and her best friend Mike were working the wall at this race encouraging racers to get over it. Two days later, on his 50th birthday, Mike passed away. My wife, Sarah, and I were going to support my sister, Joy, at the newly named "Mike's Wall" this year. I was going to race the course with my two daughters, Emily and Hannah, my niece, Jenna, and Hannah's friend.

There were three races (all the same). I started in the first race which was for the faster racers. Soon after starting we had to climb over a pile of tires and then crawl under a monster truck. Already, my lack of running was showing as I was way back from where I used to be at the start of a race. Then we had to run up a really steep hill. Well I ran, but most of the other fast starters were already walking. I recall a tube we had to go through. I had to get down on my hands and knees and they had watered the grass and mud inside the tube so I got a bit muddy. Then it seemed to turn into a running race. I ran like an old man, but continued to pass people. Eventually we left the road and headed into some woods. It seemed that we ran about a mile on rocky trails. I didn't think there were many hills in Rhode Island, but this was hilly. It reminded me of a tough snowshoe race, except there was no snow. There were plenty of steep sections to climb and again, most people were walking as I ran (ElliptiGO training?).

The trail was covered with rocks and I found that it was  just like a snowshoe race zig-zagging up and down and through the trees. My hip (or balance) won't let me run downhill safely. I had to be very cautious and almost tip-toe down the steep sections. Of course, all the runners I passed on the uphills would bounce on down the hills and fly right by me. I did notice a couple of older gentlemen (about my age) and decided to key off them. They would get ahead of me on the downhills so that they were out of sight and then I would try to reel them in on the flats and uphills. Eventually we made it down the final hill and right into Mike's Wall. Happily I found I could get over it easily, and headed off to the two smaller walls and the other large wall. There were other obstacles: trees to zig-zag through, two more mud tunnels, sacks of sand to carry up and down a hill, an inner-tube slip and slide, and a long stretch of two by fours nailed into sections of trees that you had to cross, some balance beams, and other things I probably forgot, plus zombies and people shooting water guns. It was all pretty much fun and I enjoyed all the obstacles. Somewhere along the way I had passed all the older looking guys, but there were two more races to be run. My daughters ran in the second race and I was at Mike's Wall cheering on the competitors in that heat and the final and largest heat.

Later at the awards ceremony, my name was called for winning the 50-59 age group. I was thrilled as I had a secret wish to try to win it for Mike. It was his age group and he never got to enjoy one day of his 50s. I really enjoyed running the race. I ended up in 43rd place out of almost 700 racers (results). This is a fun family race, so lots of kids were entered. I look forward to racing it again. I will say that every competitor looked like they were having a great time!

Completed ElliptiGO Every Day in May Challenge 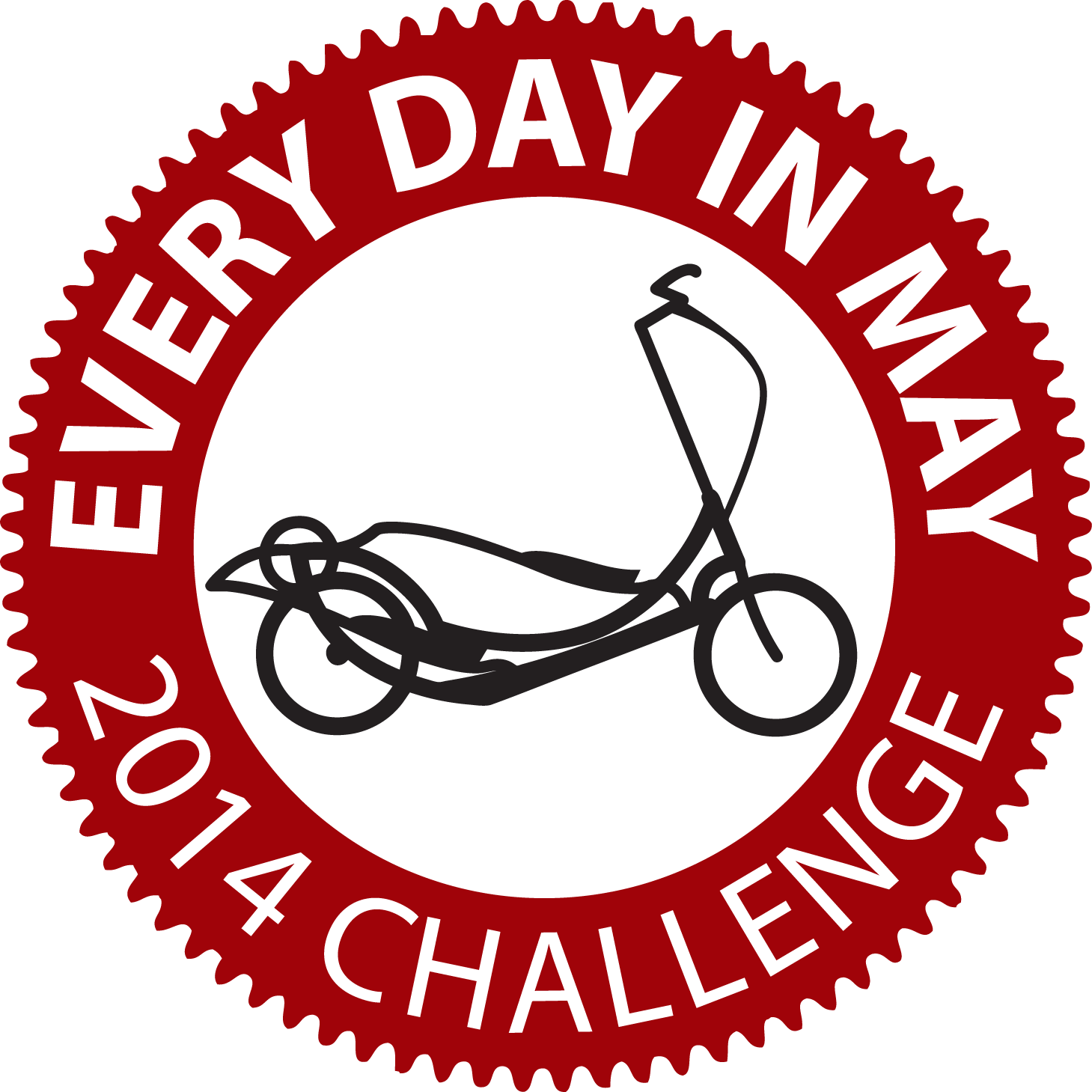 The goal in May was to complete the ElliptiGO Everyday in May Challenge. You could ride every day for 5, 10, or 20 miles per day. I chose the 20 miles per day challenge and successfully met the goal with no day offs. I rode through rain, cold, wind, and one early morning ride to make sure I didn't miss a day. It wasn't bad at all. I actually averaged over 30 miles per day while hitting the minimum 20 every day and finished with 1004 miles for the month! My longest ride was May 31 when I went 63 miles. I rode my ElliptiGO for a total of 66 hours and did 24,537 ft of climbing. The biggest challenge was keeping my ElliptiGO GOing. It now has over 5500 miles on it and it needs a tune-up and some new parts. My gears were off the last week and my riding was not as smooth or as fast as it could be due to the gears grinding and skipping. I kept trying to fix them, but never got it right. I am close to being an expert at assembling the rear wheel and components now. That is not an easy thing on the ElliptiGO. The best part of the Challenge, besides just getting out there and having a challenge, was the support and enthusiasm of the ElliptiGO community around the world. We were all cheering each other on and barriers kept being broken as people did things they never thought possible or challenged themselves to ride farther than they ever thought they could.

I have now had the ElliptiGO for 11 months and have been thrilled with what it has allowed me to do. It provides an intense workout, but it is truly fun and pain-free to use. I actually enjoy it more than running, because even after a couple of hours of pushing as hard as I can in a workout, my body does not break down at all. I can feel fit and fast without feeling hobbled. When I got the ElliptiGO, I said I would give it a year to see if I could revive my running. I have run about 100 miles in the months I have had the ElliptiGO and most of those came in the snowshoe races I did this winter. It is time to see if I can get back to running! This weekend I am going to do a low key obstacle type race called the Reviver Challenge in Rhode Island. My sister worked the race last year with her boyfriend helping kids climb over the final wall on the course. A couple days later Mike died on his 50th birthday. We are going to support my sister as she work's Mike's Wall, but my daughters and I will also do the race. I am also looking forward to running the Falmouth Road Race again this August. I also realize that while I am pain-free these days, my tight weak glutes and hip stabilizing muscles get sore if I run and cause me to limp, I don't want to run with that pain so I have to get that fixed if I can.

I decided to go in for a Functional Movement Screen at Dynamic Strength and Conditioning here in Nashua. Today I had my first workout based on what they found. It took a lot of time to get through the workout and learn how to do the movements, but it was helpful to have a trainer watching me and showing me how to do things correctly. I like that they use some Postural Restoration stuff as part of their therapy. I have some experience with PRI a few years ago with a local physical therapist and I have written about PRI a few times in the past. Together with the strength drills targeted for me, I hope that this is the final piece that will get me back running. If not I hear there is  July ElliptiGO Challenge being announced soon!
Posted by Jim Hansen at 11:08 PM No comments:

Today was a good day if you wanted to race with elite athletes. Here are local news reporter tries to run with the top two Kenyans at today's Stockholm Marathon in Sweden.

And here a couple of cyclists mix it up with the peloton in today's fourth stage of the Tour de Belgium.

Posted by Jim Hansen at 9:42 PM No comments: