WHEN RUNNING WAS YOUNG AND SO WERE WE by Jack D. Welch 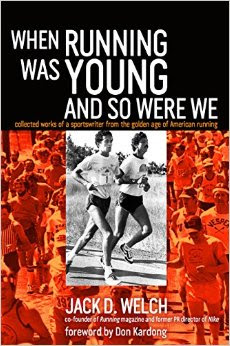 Having grown up with running during the running boom years, reading When Running Was Young and So Were We: the collected works of a sportswriter from the golden age of American running

was a look back into the golden years of running and the people and events that shaped the sport and competitions of the 1970s to 1990s. Many of the articles seemed distantly familiar to me, as they should as they were written by Jack Welch for Running Magazine and Track and Field News and reprinted here. I started reading this book earlier in the year and enjoyed in particular reading about the world class athletes and races. The writing can feel dated, as if you picked up an old running magazine (which I have plenty of) and read through the articles. At times it is fun to read about events that are still crystal clear and well known historically, at other times you may be reading about a runner on the verge of greatness, who never quite made that step towards becoming a well known name years later.

The section on running coaches may need a second read for those wondering about Chris Fox's coaching success as their are two articles on his coach Greg Shank. There are other coaches written about as well. The book also highlights many races. One annoying thing is for many of the more forgotten races, we are told the winners right up front, leaving out the mystery of who won the race as you read the recap. There are plenty of reports on the Boston Marathon, the New York City Marathon, the Chicago Marathon, and the Honolulu Marathon, among other races. The Hood to Coast relay race highlighting a Nike superstar team managed by Alberto Salazar refers to him as a "maniac" and "paranoid" traits that he carries over to his coaching today.

If you are new to running and unfamiliar with these champions, races, and period of time, When Running Was Young and So Were We

would be a good piece of reading. If you ran during these years, you would enjoy a trip down memory lane.

Extending My Rides: NiteRIder Lumina 550 and Light and Motion VIS 180 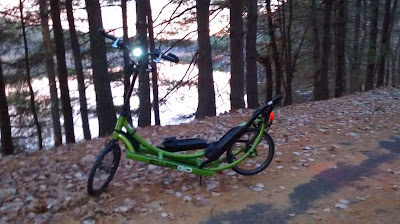 Last month as it was getting darker earlier and earlier, I often found myself racing the darkness home on my ElliptiGO. I decided I needed to be safer in those moments and see if I could extend my riding in the dark, so I broke down and bought some bike lights for my ElliptiGO.

After much research, I still wasn't sure which lights to buy, but I ended up with the NiteRider Lumina 550 Headlight

. It is a a model between the two NiteRider models recommended on the ElliptiGO site. It is charged by USB and it can blink as well as have a steady beam of light at three different intensities. I was amazed by how much it lit up the the road and felt completely safe riding in the dark with this light. On the ElliptiGO you want to place it as close to you can to the midpoint of the handlebars so the beam isn't angled out to the side. The rubber band holding it to the bar is easy to set up and holds it securely. The on/off button glows blue when it is in use and red (as I found out today) when it needs recharging, but I still rode for 30 minutes more and got home without losing light. Riding at night opens up a whole nother world! 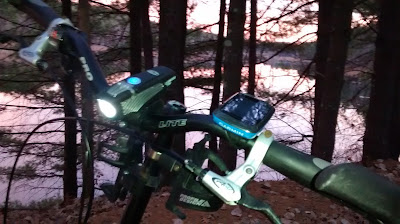 I would have been happy trying the NiteRider Solas 40 Taillight

as well, but wasn't assured that it was easy to attach to my ElliptiGO. On a friends recommendation, I bought the Light and Motion VIS 180 Degree Micro Bike Light

and quite easily attached it to the rear reflector. I secured it with some Cable Ties

so that it didn't fall off unnoticed by me. This light works great and can also blink. It is also easy to recharge by its USB plug. I noticed cars going wide around me as I rode in the dark and I guess that is the desired outcome! I also bought a cheap clipon Nathan Strobe Light

to put on the back of my shirt or jacket as I ride. It gives extra protection and it can also blink or give a steady light. Now I am in full nerd mode, but I am much safer and can ride longer while I add another dimension of fun and experiences to my riding! 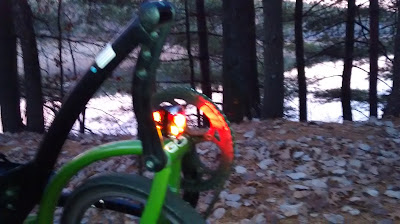 Posted by Jim Hansen at 9:21 PM No comments: