If you sit a lot or have tight hip compressed hips, you might find that this hip mobility mobilization from Z-Health gives you more space in your hips and help get you out of pain of stiffness. I felt great after doing these the first time through, so they are spot on for me. The movement and rotations make it easier for you to find your tough spots and work on those carefully.

Posted by Jim Hansen at 4:26 PM No comments:

The School Run - A short film about running in Kenya

This is a fun and perfectly done short video called "The School Run" It shows a bunch of kids at a school in the Kenyan countryside staging a race over the terrain and obstacles they encounter along the way. It brings back many good memories of my trips to Kenya, That is how the kids have fun and this really shows their personalities! They love acting out things, but "ouch" to how they get medals for the winners. I brought an ElliptiGO bottle opener to give to the school I was working at this summer. You are always looking for a bottle opener there! I only wish more American kids still had the opportunity and desire to get outside and play like this!


Published on Mar 13, 2013
Three Kenyan school children rise to the challenge of emulating their National hero's by staging a steeplechase through a beautiful Kenya backdrop.

Filmed on location thanks to the work of the staff and children at the Tumaini Mission Centre - Jitegemea Schools.

The music on this is great too!
Posted by Jim Hansen at 1:57 PM No comments:

Having been told through the years that I have tibial torsion in my left leg, I am not always in agreement with the doctors and therapists. Yes, there is something there and has been since I started running in high school that goes along with my femoral anteversion in that leg, but sometimes it is bit very pronounced and sometimes it looks horrible. Some of the photos of my leg twisting and compensating in the last 10-15 years of running I did where just crazy looking. Since my arthroscopic surgery in 2011, my running has been curtailed, but one thing that I notice is that some days I feel great (and that is when my lower leg is straightest) and other days I feel terrible and that is when my leg is rotated out a whole lot more and my knee gets really tight.

I had been doing some lunging stretches where you use your hands to rotate the tibia back as much as you can, but here is another similar move that I have been trying. It is hard to "feel" any movement, but it seems to help when things get messed up.

Posted by Jim Hansen at 6:51 PM No comments: 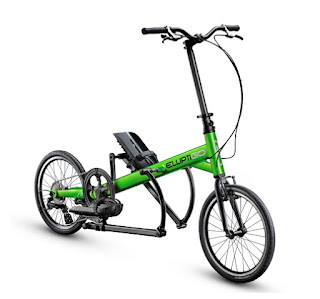 Here is the new and interesting ElliptiGO bike as unveiled this morning. It looks like I was pretty right in what the new ElliptiGO would be, but I am surprised with how cool it looks and am looking forward to ride reports. It is cheaper than their other models, but that means it is lighter and quieter and has a shorter more circular motion. It looks like it will be great for shorter rides and as an introductory bike for those who won't be putting in 200+ mile weeks. You can see ElliptiGOs page with photos, a video, and its comparison to the other ElliptiGO models here. I think this will sell like hotcakes!

One thing I noticed the other day is that Amazon now sells the EllitpiGO. I would rather GO through a dealer, but it is good place to read reviews. The Arc is not on Amazon.

Posted by Jim Hansen at 9:27 AM No comments:

ElliptiGO is coming out with a brand new model! And it is going to be different!

According to this tweet  ElliptiGO is coming out with a new version of its bike. It looks like it is still under wraps, but there are some clues in the photo that lets you know this is not the same ElliptiGO model that is sold today. I noticed right away that it doesn't seem to have the drive arms protruding above and beyond the rear wheel. 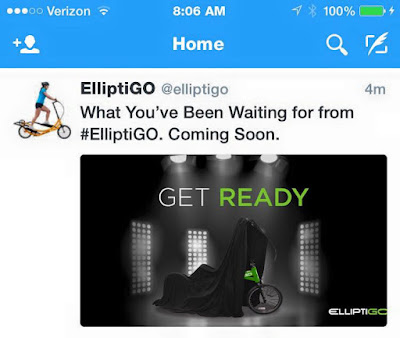 I am no expert on what ElliptiGO is going to unveil, but I have heard rumors and have had discussions and my guess is that it will have a  lower price point by having not as long a wheelbase and not as long a stride (or even the same motion), so it will have slower speeds. Maybe it will be a beginner or introductory machine for those who think an ElliptiGO is too expensive (and who may move up at a later time to the current models). Maybe it will be more a training or supplementary machine for those who won't GO as many miles, but could use one when injured or to cross train without so much of a commitment . I am very excited to see this as many people balk at purchasing an ElliptiGO due to its price. A lot of the cost of an ElliptiGO does come from its quality components and that long wheelbase is something that, I am told, adds greatly to the cost of the machine. It will he interesting to see what this is when it is revealed. If you want to know more, you can sign up here with ElliptiGO to be notified. It does say you have to wait a few more days, so it could be soon!

UPDATE
The new ElliptiGO has been unveiled. See my post for more information here:

One thing I noticed the other day is that Amazon now sells the EllitpiGO. I would rather GO through a dealer, but it is good place to read reviews. The Arc is not on Amazon.