Former Boston Marathon champion (1970) and the second man to break 2:10 in the marathon, Ron Hill, is about to master another long distance and long running achievement. On December 21, 2015 he will have completed his 50th year of his running streak of running at least one mile per day. Here is an article by Jason Henderson at Athletics Weekly that explains Why Ron Hill is Running Royalty.

I didn't start running until 1973, however I knew a tiny bit about Ron Hill already. I knew he was one of the favorites at the 1972 Munich Olympics in the marathon and I knew about his string fishnet singlet that he wore at races like his Boston Marathon victory. I must have been aware of photos of him and the "science" behind his choice of clothing. Once I started running, I wanted to look like a runner, so I went to the local Bradlees store and found a fishnet jersey, probably in the underwear section, and bought it. It was my first ever running related purchase (even before getting "real" running shoes) and my inspiration was Ron Hill. Fifty years is an incredible running streak.

The "Inventing to Nowhere" documentary featuring the ElliptiGO

Last night was the premiere around the country for the Inventing to Nowhere documentary. I missed the local showing at an Imax theater, so I am glad they posted the video online today. The documentary highlights the dangers of patent reform in our country. One company highlighted throughout the video is ElliptiGO. There are three key sections on the ElliptiGO in the film. It explains the design and history of the product and bringing it to a proof of concept, protecting property rights, and even a call to a shop in China that is selling a knock-off through Alibaba (here is one example). ElliptiGO inventors Bryan Pate and Brent Teal are featured throughout. I had the privilege of meeting Brian at the first End of Summer Classic ElliptiGO race and Brent is the guy who holds the fastest American time for riding an ElliptiGO 100 miles. I am gunning for his record. As far as I can tell, I have the third fastest (2nd fastest American) century ever ridden on an ElliptiGO.

It is an interesting documentary and fans of the show Shark Tank will appreciate a lot of the background information in order to better appreciate the the challenges of being an inventor.

Posted by Jim Hansen at 5:23 PM No comments:

while riding my ElliptiGO indoors for 25 miles. The recently released movie is currently playing on Netflix.

Is the Bionic Runner competition for the ElliptiGO? 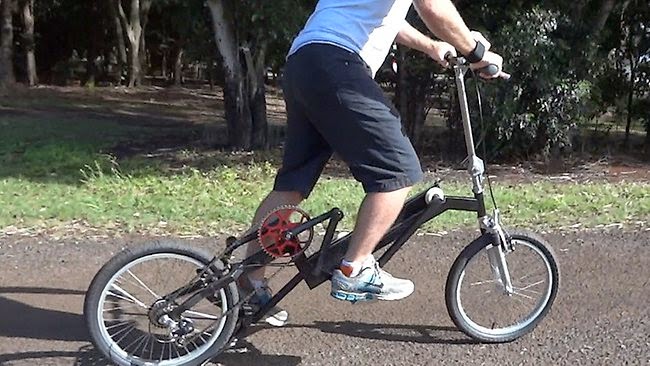 The Bionic Runner looks like an interesting redesign of the ElliptiGO. It is on Kickstarter now and it seems if you are one of the first to order, it would be easily under $1000 shipped. Otherwise it seems priced at around $1250 which is one-half of what an 8-speed ElliptiGO would cost. It looks lighter, yet not as sturdy and it folds up for easy transportation. It also does not seem as speedy as an ElliptiGO as this page says that riders are going up to 20 km/hour on it which is about 12.4 mph. They are marketing it as "The only running fitness trainer to replicate the natural motion of running." and I believe this is based on their, "Patent pending 60:40 swing/stance phase timing." So in my thinking and in watching the video, it seems to have a shorter stride with a higher kick back. I am wondering if using their formula, it means that a person using an ElliptiGO has a longer stance phase. This article seems to report their feelings on how it is differentiated from an ElliptiGO.

When first seeing the Bionic Runner, many people may think that it's more or less the same thing as the ElliptiGO – which is essentially a two-wheeled elliptical trainer. According to Run4 co-founder Dr. Henry Thomas, however, there's a key difference between the two.

"We discovered that running was a four stage process of leap, recovery, impact and drive," he says. "The existing cross trainers were all elliptical in nature or step machines. None captured the motion a runner's leg makes when they move."

As a result, the Bionic Runner was designed to guide users through a mid-foot running gait, allowing them to engage the same muscles that they would when running on the ground – while also protecting their joints from over-exertion. Additionally, it provides a bit of lift at the "toe-off" of every stride, plus users are able to increase or decrease resistance by shifting it into higher or lower gears.


It looks promising as an alternative to running and the price is right, but I love my ElliptiGO, which looks sturdier, seems much faster, and has a company behind it that is top-notch.  I only have less than 200 miles to GO in order to hit the 6,000 mile mark for the year 2014!