History of the Falmouth Road Race: by Paul Clerici What day of the week was the first race held? 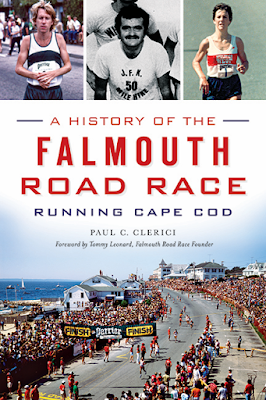 ,” it is written by Massachusetts runner and writer Paul C. Clerici, author of “Boston Marathon History by the Mile” and “History of the Greater Boston Track Club.” In a series for Recover Your Stride, he has provided some anecdotes, tales, and tidbits that will run here on a regular basis leading up to the 43rd edition of the Falmouth Road Race on August 16.)

I bet you didn't know on which day of the week the first Falmouth Road Race was held.

I met Paul last year and was thrilled to find out that he was writing a book on the history of The Falmouth Road Race. This is the one of many tidbits from the race that he will be providing my blog in anticipation of this year's Falmouth Road Race. If you are like me and enjoy reading background information and hearing the history of the great runners and races from the "running boom" years, you might want to do a few things in anticipation of reading Paul's upcoming book.


My blog has a lot of photos and information on the early days of the Falmouth Road Race. The first year that I ran was the historic 1975 race. You can read about it here. Kings of the Road: How Frank Shorter, Bill Rodgers, and Alberto Salazar Made Running Go Boom

by Cameron Stracher tells about the runners and the races that made the "running boom" and the 1975 Falmouth Road Race plays a pivotal role. You can read my review here. Paul has written other books on running including Boston Marathon History by the Mile

and History of the Greater Boston Track Club

I am very much looking forward to reading Paul's new book on The Falmouth Road Race.

ElliptiGO Rider of the Month

May was a pretty interesting month for me and it culminated with ElliptiGO naming me their Co-Rider of the Month. You can read the write-up and interview here. If you check out the names of athletes who have previously been named the Rider of the Month, you will see some world class and national class athletes as well as some names known mostly to the ElliptiGO world for their amazing accomplishments, so it is humbling to receive this honor alongside these great athletes.  In the ElliptiGO world, there is the Every Day in May Challenge. In this challenge, you sign up to ride at least a certain amount of mileage per day. You can choose a 5 mile, a 10 mile, or the 20 mile challenge. You can earn some points for some really nice ElliptiGO swag at the end of the year. Last year, the first year they had the challenge, I rode the 20 mile challenge, never missed a day and reached a total of 1004 miles. This year I planned to beat that total, but sometimes things happen.

May also started off with the ElliptiGO Spring Classic, so I got to spend a couple days riding with other ElliptiGO riders and then doing the 5k race to the top of Castle Hill. I had the most epic duel during the race and eked out a win by the slimmest of margins (making it my third win in three ElliptiGO races). I then got busy with the Every Day in May Challenge. In the middle of the month I got to be one of the lead bikes for the inaugural Gate City Marathon. It was a hot day for the runners, but it was fun riding my ElliptiGO through the streets of my city and leading the racers. The leading team was a relay team, and it got real interesting as they neared the finish. It was thirty years earlier to the day that I had run the Gill Dodds Marathon in Wheaton, Illinois in a time of 2:50:07. I realized the high school relay team was running about the same pace. They ended up finishing 27 faster than what I had run long ago, which left me somewhat impressed with how I used to run, because these guys were running very quickly.


Lead and trailing bikers before the marathon. 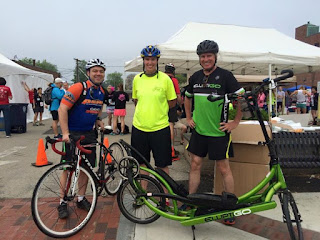 Here is an epic photo of the leading team finishing together. 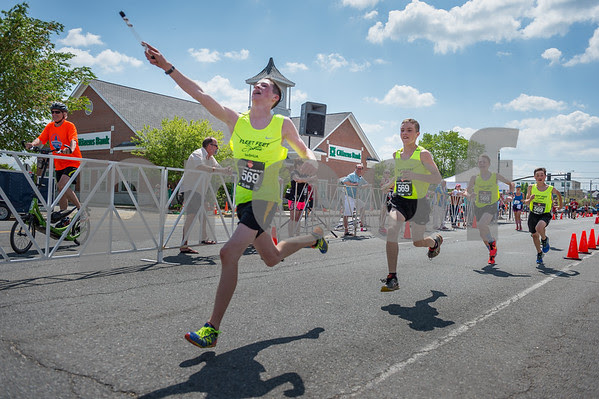 Things were going good in May including a week where I rode over 300 miles for the first time, but then I had an doctor's visit. At the end of April I had my first ever bout with kidney stones. It was a horrible experience and while I got rid of a stone from my right kidney, I was told I had two more stones in my left kidney. Knowing that I would be traveling to Kenya in July, it was suggested that I should have them "blasted" to force them out and the day to do this was May 25. I had hoped to get my EDIM (Every Day in May) ride in before I went to the hospital, but the appointment was too early and I don't have lights for riding my ElliptiGO. I was told that sound wave would "pulverize" my kidney stones so they would come out easier. I decided not to ride that day as I would be drugged up with pain killers. You are allowed three days off for EDIM as long as you have done the required mileage on another day. Well the "blasting' put me through three days of misery as the pieces of stones worked their way out of my kidney. After three days I was very sore, but there were two more days in the challenge and I had no more rest days. It probably wasn't smart, but I got my 20 milers in both of those days, although I rode slowly and tenderly. I then took the first eight days of June off to finish recovering before I rode again! But I got my EDIM points! While I did finish the challenge with 1019 miles-slightly more than last year, I wasn't happy that I had to miss the three days.

While May was mostly a fantastic month, June has not been one at all, I missed eight days and then I have been riding with broken gearing. ElliptiGO is great and their head mechanic, Keri, called me when learning I was having problems to help me troubleshoot. We came to the realization that my hub had a broken prawl (so fifth gear was skipping). ElliptiGO is sending me a replacement refurbished hub and wheel at cost which is great, because it would have been an expensive repair. I have never seen a better company anywhere. They create challenges which leads to a wonderful worldwide supportive community and they have outstanding customer service. Plus they have made the most fun exercise device ever. It has kept me running when I cannot run.I have now had my EllitpiGO for exactly two years and I have accumulated over 13,000 miles of riding it in that time!

Well, I do keep trying to get back to running. Tomorrow I go for my third round of prolotherapy injections for my si joint and low back area and then the next day I travel, for the third time in five years, to Kenya where I will teach students and work with teachers in the Mathare Valley slum of Nairobi. I wanted to see if I could run a bit while there this year, but the kidney stones slowed down my efforts at running. Anyhow Friday I ran 2 miles-my first effort in a month, but the next day I had trouble walking due to tight muscles around my hips. Sunday, I ran 4 miles and felt a little better the next day. Today I ran my longest run in over two years. I ran for 7 miles. My si  joint feels good and strong. My hips are still imbalanced and every stride I can feel something in my hip joint. I am not sure if that is arthritis, an impingement, or just due to tight muscles. I am definitely NOT back to running that distance, yet, but I think I  am ready to try some shorter runs in Kenya.

Update: Went for prolotherapy injections today and the doctor said that I am good after two sets of injections. She didn't think I would need them today for my si joint, particularity as I will be on an airplane to Kenya tomorrow. That is good news as originally, she said it usually takes 6 visits and I might not notice any improvement until after the third set of injection, but I got improvement right away. It is also good because insurance does not pay for prolotherapy, so I will save some money. She did give me two trigger point injections for my low back. I will see her at the end of August to see how I am doing. I guess it is time to find a good stretching and strengthening routine, which I have kept away from recently so as not to pull on my si joint.
Posted by Jim Hansen at 12:28 AM No comments: