Here are three unique foam rolling techniques to enhance your running, recover faster and stay injury-free as presented by Fleet Feet Sports-Chicago. Don't get stuck just rolling back and forth on your foam roller (or use it as a pillow when you lie down on the floor to read or watch TV-my habit). The roller shown in the video is the Trigger Point Performance Grid but there other rollers could do some of these same tricks.

Three Century Rides on my ElliptiGO

September was the month for centuries. For three straight weeks, I rode a 100 miler on my ElliptiGO. I started with the Ride for Angels century which was held on September 13 and started in North Andover, MA. It would travel through Southern New Hampshire and Northeast Massachusetts. It was hillier than I had imagined and we had some wet roads in the morning and mild rain later in the ride. I had a brake pad that was rubbing and my chain dropped off twice. Not only that but I went off the course and up one of the bigger climbs of the day before turning around and getting back on course. I hit the 100 mile mark in 6:35 elapsed time. I try not to stop except to fix problems or to navigate. 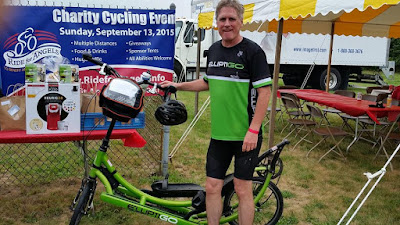 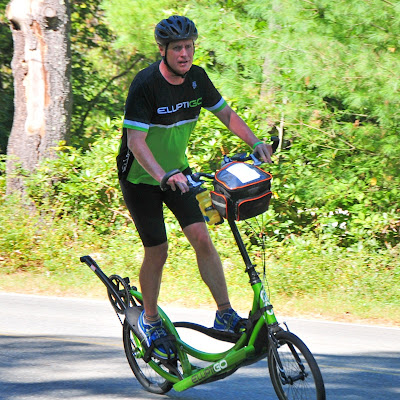 Six days later, I rode the Tri-State Seacoast Century. This was my third year doing this ride (2014 and 2013)  and this year the chilly wind was blowing in the opposite direction. The first half of the ride was riding into the brisk wind and the return trip was supposed to have more of a tailwind, but the course was more sheltered and this was my slowest of three tries at this century.  My elapsed time was 6:46 for the 100 mile mark. I guess this is not the year I go under 6 hours. Doing it the way I ride them, without stopping for rest stations, is a tough way to GO 100 miles. The effort is similar to running a marathon and you go through the same draining of energy near the end. 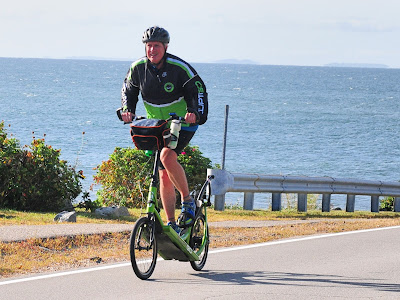 Posted by Jim Hansen at 9:39 AM No comments: