Going to be heading up Mt. Washington on my ElliptiGO!

First off, I was a bit disappointed that there would be no east coast ElliptiGO race this year to get me hyped up and training harder. The previous three New England races were a blast and got me in a competitive mode that I so enjoy and miss! I do understand that it takes a lot of work to put on a quality race and that things did not work out this year, so I had to find a new challenge.

Sure, I will be doing more centuries and trying to break the 6 hour barrier, but that is a different kind of intensity. I could go out to the Mt. Palomar ElliptiGO World Championships  in the fall, but that is way out of my price range (although some year I hope to make it to the race). I started thinking it would be cheaper to do a race in my own back yard of New Hampshire and that would be to ride my ElliptiGO in one of the two bike races up Mt. Washington. Then I saw how incredibly expensive the race entry fees were. Further research showed that one of the two races, Newton's Revenge, would not be held this year, so that left the Mt. Washington Hill Climb  held on August 20. Two ElliptiGO riders rode in the Newton's Revenge event in 2010 so if I wanted to bite the bullet and try out this race, I thought it best to ask first if I could ride my ElliptiGO before committing to the race and paying for the entry. I was told I would be OK for riding since it had been done before and that they would keep no official records- they also allow tandems and  unicycles- with no records, but even better, they added an ElliptiGO category to the race- you can even see it on the entry form. With thanks, I sent in my entry fee and at least one other rider is joining me. I hope to see more this year as I am sure this will be a one-time deal for me and the more the merrier.

I have two goals for the race:
1) finish within 20 minutes of my fastest run up the hill (who even knows if this is possible)
2) ride all the way up without stepping down off of my ElliptiGO.

I have ridden up Pack Monadnock twice now and it has a steeper section than Mt. Washington.
The first time up, I had to put my foot down as I was tired from trying to blast up it as a 10 mile "race"effort on the old Pack Monadnock Road Race course.The next year I made it to the top without putting my foot down, but it was terribly hard to keep moving and balanced on the steeper sections!


I have been up the mountain many times before, mostly in the Mt. Washington Road Race. When I was about 10 years old, my family drove to the top and down in our 1962 Chevy 2 wagon that was falling apart. It was quite an achievement for that car.

I am sure I will have to add some hills to my training and change my gears so I have a lower range for the steep climbing. Who know what it will bring, but it should be fun in its own crazy way!

My running times at the Mt. Washington Road Race:

So now I have something to look forward to (or regret). 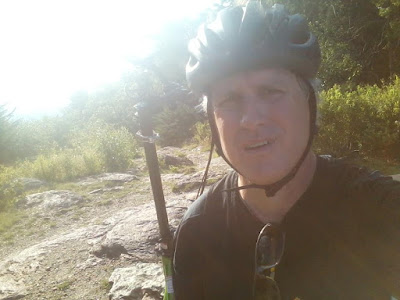 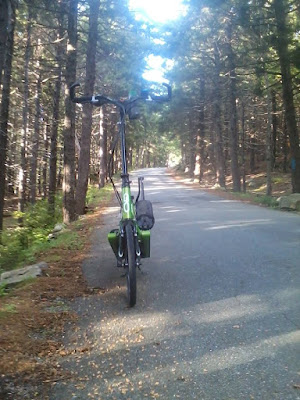 Posted by Jim Hansen at 3:21 PM No comments:

Here is the USATF video of the one mile race at the Armory Track in which high school runner Drew  Hunter broke the 4 minute mile for the first time and set a new high school indoor record. Alan Webb, the other high schooler who has run sub 4 indoors was the previous record holder. This is also the third fastest high school mile ever run indoors or outdoors behind Alan Webb and Jim Ryun. His mile time was 3:58:25.