I uploaded my first video to Youtube. It is a video of the 1983 Cape Cod Endurance Triathlon. This was a full Ironman distance triathlon that was a response to the incredible finish of Julie Moss during the Hawaii Ironman race earlier that year. I was running the Boston Marathon in April 1983 when I heard that Dave McGillivray was going to put on this race. I knew I had to do this even though I had no competitive experience in either swimming or bike riding. I immediately bought myself a $300 bike and began my journey towards being a "triathlete".

I had just finished my first year of teaching and went back to the Cape for the summer. I swam in the ocean in Falmouth and biked and ran. I completed a small club triathlon put on by the Falmouth Track Club. I came in 2nd to last out of the water then sprinted by everyone I could to get to my bike (I already knew that transitions were important) and got on the bike and flew. The roads were wet and I skidded off the road twice but still had the 2nd fastest bike split and was in 2nd place. Then a funny thing happened. I tried to run, My knees kept flying up into the air and my legs would not behave. I got passed by one person and finished with a smile on my face. This was cool!

The next race was a bigee on Aug. 27, 1983. The United States Triathlon Series came to my hometown of Falmouth. Julie Moss was even in attendance to promote the race. Back in 1983 the distances in the USTS races were a 2k (1.2 mile swim), a 40k (25 mile) bike, and an 15k (9.4 mile) run. The day was stormy and that meant there were hills on the swim course. The race directors did not want to listen to town officials and did not delay the swim (costing the chance for another triathlon to be held in Falmouth for many years). Everyone (600+ swimmers) started the swim at once and I swam in survival mode (like everyone around me), head up out of the churning water trying to stay alive. It took me 48:22 to finish the swim, next I completed the bike in 1:15:14, and finally I got to run. I ran the 15k in 58:39 and only got passed by one runner, Dave McGillivray, who finished 4 places ahead of me (but he was a running legend- having run across the USA- and had competed in the Hawaii Triathlon so that was fine with me). I came in 90th place overall in 3:02:42.

That race was my longest swim before the Cape Cod Endurance Triathlon on September 10. My longest bike ride was about 60 miles with a nice McDonalds meal before starting (I had no idea about nutrition). As you can see in the video the jellyfish were annoying. I kept feeling them on my fingers. Since my head was mostly out of the water I didn't get stung like the competitor who took one in the eye.

When Robin Young is interviewing Dave McGillivray at the beginning of the race with all the triathletes gathered round, you can see me directly off Dave's right shoulder. I am the very skinny young guy who should have been a lot more nervous than I look.

The swim was very intimidating for me. At around 2 miles I got a calf cramp. Someone on a surfboard wanted to know if I would like to quit. No way. Then I noticed I could stand on a sandbar at this point which calmed me down completely and was something I kept note of for future years.

Then it was onto to the bike. My cleats were loose but that was OK because I still hadn't found a way to get comfortable with my left foot (even to this day) so there was a lot of wiggle room.

At the beginning of part 4 as Robin is interviewing Dave at the Provincetown bike turn-around you can see a biker trying to figure out what is for lunch. That is me back there looking at the sandwiches, cookies, and bananas. There was no such thing as an energy bar back then.

I was so happy to get off the bike and to do something I knew how to do and that was to run. At halfway however I sat in a restroom and it was so quiet and still I didn't want to come out. Eventually I got back to running and walking. But with 6 miles to go I started running with another runner and had such a reawakening and ran the rest of the way feeling great and passing runner after runner (the last 6 miles of the race for the next 4 years went just the same- super energy and pushing the pace). We finished in a tie in 13:37:18. I was 75th overall. 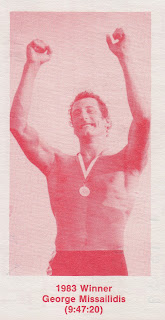 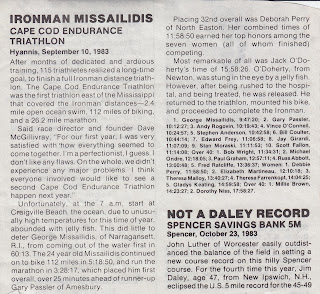 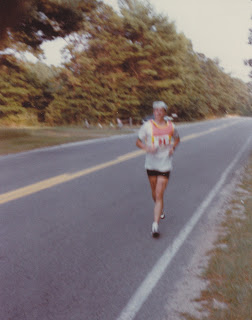 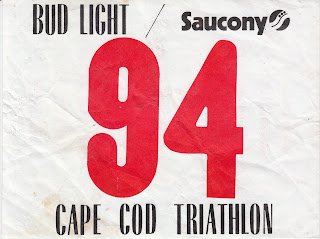 In 1988 I got married, then had a bike crash that broke my collarbone, and had a back that was in such terrible shape that I am still trying to fix things today. I have only done a handful of triathlons since those days but I remember competing in triathlons throughout New England quite fondly and the 5 days that I did the CCET were 5 of the best days of my life!

I put these videos on Youtube wondering if anyone would be interested in a 25 year old race. I posted it on a triathon message board called slowtwitch.com. Fellow competitors of the CCET showed up (fishman, Norton, and IronRod) and they mentioned how they loved they race. Then this morning I see I post by BermudaBill and he mentioned that "the circle is now complete" and posted a website that I really did not need to see. They are having another Ironman distance Triathlon on the Cape (well Plymouth) and all of a sudden I started thinking and dreaming. Can I do it again? Oh how often I wished the race was back and here one is. The thrill was starting in my body even though I know that I only have a 23 year old racing bike and cannot afford the exquisite and expensive racing bikes of today.

Triathletes were commenting on this "old school race" and talked about the "personality of the sport" that is "missing in big time triathlons today". Someone else wishes that races "could capture that type of feeling in events these days" and remarked that "the emotions displayed are like little kids at Christmas, just pure joy!, raw joy." And that is absolutely correct. That is how it felt back then.

I got to wondering if "going for it" at a race like the new Plymouth race would ever recapture the true spirit of triathlons that I miss so much. Maybe it would and maybe I will set a goal to do it one day if that race continues on. I know I would love to do that training and racing again (if my body would allow me to)and it was good to feel those stirrings again like I did today: getting all out of breath dreaming about having another go at completing an Ironman distance race.

In the year 2000 I would later reconnect with Dave McGillivray and ran the Boston Marathon with him. The story is here.

Here are the complete results of the 1983 Cape Cod Endurance Triathlon. 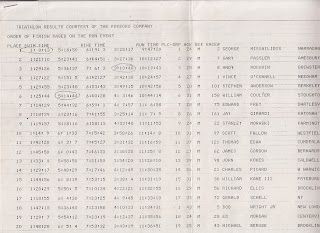 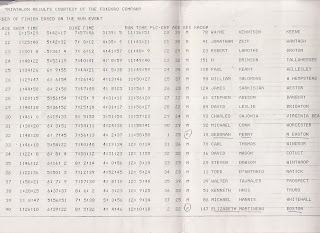 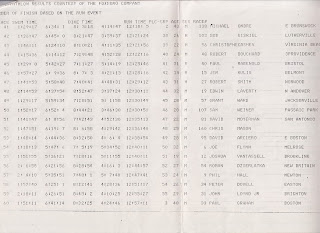 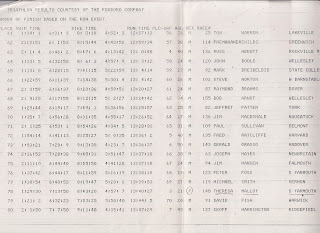 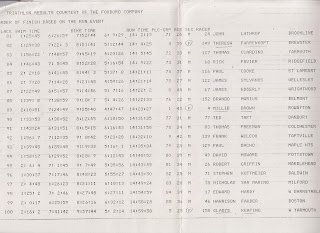 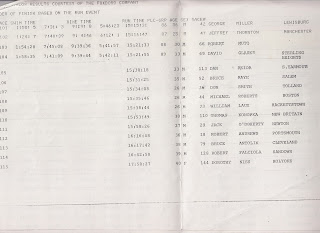 I enjoyed your posting.
I did this event in 1987. I had tried to get into the Hawaiian Ironman for a few years. I wasn't fast enough to qualify, and I never got picked in the lottery, so I ended up in Cape Cod. What a great event! I still get teary-eyed, remembering how I felt as I crossed the finish line. As I recall, the water was extremely choppy that day, and it rained during most of the bike. The competitors were from all over the country and everyone was very friendly and supportive. My girl friend (who I eventually married) and I also enjoyed exploring Cape Cod and the surrounding area. What a blast that whole experience was. BTW, my finishing time was 11:10,and I was in 75th place.

I raced in the 1983 inaugural event. In the results on page 2, line 30, I’m listed as Charles Sajonia. My full name is Charles Blake Sajonia. If anyone is out there who did this race, friend me on fb so we can reminisce. I just did Ironman Maryland 2014 as my 2nd IM-distance race after all these years ... beat my prior time. Race report on fb page linking the two experiences: https://www.facebook.com/blake.sajonia

Blake, that is quite a comeback I have been wanting to make for years (since I stopped doing the CCET in 1987). Congrats on making it back! I am pretty sure it won't happen with me as those triathlons messed up my back and it took me until a few years ago to realize that it was really my hip. There was no bike fit for me in those days or any idea of sports medicine. Boy, have things changed.
We were pioneers!