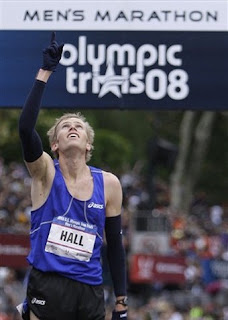 One of the greatest running quotes of all time comes from the Oscar winning movie Chariots of Fire.

As you may recall, in this movie based on the 1924 Olympics, Scottish runner Eric Liddell disqualifies himself from the 100 meters because he refuses to run on the Sabbath. A teammate gives up his spot on the 400 meters so that Eric has a chance at winning a medal. During this final scene in the movie, as Eric Liddell throws his head back towards the heavens and races towards the finish line we hear his words proclaim, "I believe God made me for a purpose, but he also made me fast. And when I run I feel His pleasure."

Non-runners don't get it, but that quote so perfectly encapsulates the joy of running that many so perfectly feel and pursue. I think it has become so ingrained in my soul, that I continue to want to "feel" this joy despite injuries and pain that tell me that maybe my running days might possibly be over. When people tell me that I should just quit and find something else to do, I can't. I think running is so written into my DNA. I just want to run and it is one of the profound ways that I can experience the pleasures of being a human.

This week I read Ryan Hall's new book Running with Joy: My Daily Journey to the Marathon

on my Kindle. This book is a journal-like build-up of the 14 weeks prior to Hall's running of the 2010 Boston Marathon. In it Ryan details his workouts, his thoughts and doubts, his routines, and his spiritual thinking. Much has been said about Ryan Hall and the decisions he has made as a runner and particularly his spiritual thinking. This year, he even walked away from his long-time coach so he could coach himself with God's guidance. This sent the running message boards into a frenzy. So what is up with Ryan Hall? 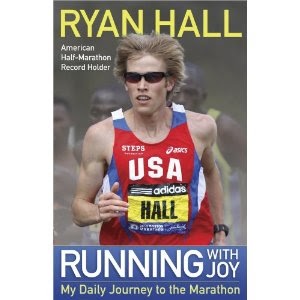 Ryan is open and honest in his book as he dishes out his daily thoughts. If you want to know his training schedule and routines, it is here. What is interesting is his chronicles of doubts along the way. Who knew that a world-class runner hurt as much as us normal runners? If you want to get to know more about Ryan's life, this really isn't a biography. Most of the background information in the story has been written elsewhere. This is more of a snapshot of a period of time. He does break apart from the journal routine to give specific short passages on training and other running related issues. These are interesting, but not thoroughly in-depth. We learn he does self-massage with rollers or massage balls, but it would be real interesting to learn the specifics and routines. Fourteen weeks is a short amount of time and we learn a little bit about his running wife, Sarah, but not a whole lot. In fact I found this short blog entry by Ryan Hall to be more entertaining than just the basics in the book. What we are left with is a running and spiritual journal. 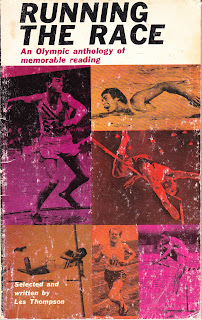 The first book on running I ever received was a book given to me when I was about 10 years old called "Running the Race" (1968). I still have it. It was a book about great Olympic athletes and their challenges and triumphs. Many of the stories reflected on the spiritual lives of these champions. I was nothing but a run-around-the-neighborhood kid when I first read the book, but the stories of Jesse Owens, Jim Ryan, Kip Keino, Roger Bannister, Paavo Nurmi, Emil Zapotek, and others certainly influenced the future decisions I made to become a runner.

The next two running books I  read when I started running in ninth grade were the biographies of Jim Ryan and Kip Keino, both runners who integrated running and faith. Other books, such as Meb Keflezighi's recent biography tell about a strong faith, but Ryan's book is something different all-together. A non-runner reading the book may find the descriptions of his workouts indecipherable, likewise a non-believer may find his spiritual thoughts and devotional writings incomprehensible. I admire Ryan Hall, for letting us take a glimpse into his thinking processes. I am not sure he did the best job articulating his goals, but I think his thinking was a work in progress. It may just be the journal format, or the fact that we are seeing his thinking more than his actions beyond the running. Or maybe his dream is just too heavenly too describe. I think it comes down to Ryan wanting to feel God's joy when he races. He wants to rediscover that joy he had when winning the Olympic Trials marathon in New York City, finger pointing to the sky, full of run in the final strides, during that overwhelming championship run.

It then becomes a struggle for Ryan to develop a plan for racing. Do you run to win or do you run to feel God's pleasure? What if God's pleasure is for him to win? What if is is not? Ryan tries to make sense of his thinking and in today's world where winning is usually everything, what should be Ryan's mindset? Some people will probably pour hate on the book because of Ryan's spiritual inclinations. Some will not get it at all. Some will see a champion who is trying to keep his head on straight and not let fame interfere with personal growth. Others may delight in reading about Ryan Hall's spiritual path. Even if you read the book and don't enjoy it, at least you know that the profits from the book will be going to Ryan's Hall Steps Foundation.

"I really struggle with the concept of having only one winner. I don't want to tell kids that if they do their best, work hard, and sacrifice, they will accomplish their dreams. If their dream is to win the Super Bowl they will probably never accomplish it. Instead, I want to encourage kids to focus, work hard, and dream big because the journey is what matters. To dream and live a life of devotion is better than to never dream at all. As we pursue our dreams, we realize the abundant life."

"I feel that it would be robbing those who are interested in my running to not share what it is that makes me tick and about the journey that I am on. I realize that everyone may not agree with everything I believe in, and that's alright. I think we all need to extend the grace to one another to allow people to be who they are and way what makes them who they are."

But if you really want to experience what I think Ryan Hall is trying to articulate in this book, just re-watch the ending to Chariots of Fire.