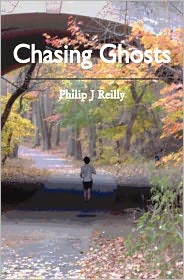 I was looking for another interesting and inspiring book to read as I recover from surgery and came upon a fictional story called Chasing Ghosts written by Philip Reilly that was released earlier this year. Recommendations for the book compared it to the classic Once a Runner so I decided to order it for reading on my Kindle. The book was an excellent and entertaining read. The story rang true as it was written by runner and tells the story of Joey McNeal, a runner from Philadelphia, who decides to take out his running shoes one more time to see how far he can really go with his talent after having retired from running post-collegiality. Still having regrets about his racing career, he decides to vanquish any ghosts of his past, so he doesn't have to ask, "What if?"  As he says to his girlfriend midway through the book as she question his devotion to running:


You want to know why I am running so hard? Because I still can. It's what I do, heck it's what I am. If I am not training hard for something, then I feel like something's missing. Ever since I was twelve years old, I've run....I just need to know. I need to know how good I can be before it's too late... Every time I wake up in the morning with aches in muscles I didn't know I even had, I realize I am not 20 years old anymore. But I sure ain't dead either...I want to run to the best of my abilities and try to be great.

That quote tells it like it is for many a runner. It is a story that runners from aging weekend warriors to highly competitive athletes can thoroughly enjoy, because it is the story that we all live every time we go out on a training run in anticipation of getting the best out of our bodies. Joey McNeal had given up competitive running and was working as a teacher and coach when he decided to give running one more shot. He gets three former teammates and friends to join him in his running quest. An acerbic old Irish coach guides them as Joey strives to make the 1988 US Olympic team in the 800 meters race. One thing I enjoyed about the books was the likeable characters and their realistic lives as they go about "living the dream." I also enjoyed hearing about the training and racing along the way as Joey attempts to qualify for the trials. As a distance runner, I was interested in the training and the racing accounts for an 800 meter runner. It is a distance I have never raced, but the more I follow racing it is a distance that gathers my respect and admiration. It is not really a distance event and not nearly a sprint. It takes both speed and endurance as well as a workable strategy. Go out too fast and the gorilla jumps on your back as you near the finish, go out too slow and no matter how fast you sprint at the end you may be outrun or boxed into a position that keeps you from winning the race. It is a wonderful distance to watch if you enjoy the drama of how a race unfolds and in the book the pain of the distance is abundantly clear.

Chasing Ghosts is also realistic in its portrayal of racing choosing the Millrose Games and the Olympic Trials as key races, as well as the Broad Street 10 mile race in Philadelphia. The Millrose Miles turns out to be a realistic race with world class runners Bernard Lagat and Craig Mottram competing with our fictional hero. Alan Webb, Galen Rupp, Letsrun.com, and other names and places give the story a real and familiar feel. However, the most important race in in the story, no matter how wonderfully and agonizingly portrayed, cannot compare to the actual race that really took place at the 2008 Trials. I am talking about the 800 meter final in the 1988 Olympic Trials as seen in this video. How do you compete with that? I get goosebumps every time I watch it!

Well the racing scenarios and the story of Joey McNeal and his friends, make for an entertaining read. The 800 meter Trials race and the ending is satisfying and leaves an opening for the story to continue.The one thing that I didn't like may be just something related to reading the story on the Kindle. There were some mistakes, but most glaring for me was the formatting of the story. There was a mix of indented paragraphs and paragraphs that were not indented at all, which was the usual case. My brain hesitate at each of these mistakes as it didn't just "appear right" as I was reading. Maybe these will be fixed in the future if it is a Kindle formatting problem, but other that that if you are looking for an inspiring read, Chasing Ghosts