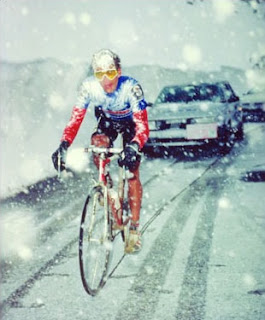 With the Giro d'Italia (Tour of Italy) currently underway, Austin Murphy of Sports Illustrated takes a wonderful 25 year peek back to at the 1988 Giro which American Andy Hampsten won in epic fashion. Hampsten's courageous ride on the 14th stage over the Gavia during a blizzard is legendary. Whether you were a fan of cycling, like I was back in 1988, and you who Andy Hampsten was, or you have never heard his name, you should know him as one of the greats of American cycling and his race over the Stevia as one of the greatest rides ever. It did pass my mind back in 1990 when my son was born that the name we gave him, Andy Hansen, sounded very cool and similar to Andy Hampsten! You can read the article here.