I know a lot of people do not have much respect for the Nike shoe brand these days, but being a runner from the 70's I have nothing but pure nostalgia for the glory days of Nike. One of the few things I would spend my extra money on while I was a poor college student was the latest and greatest running shoes from Nike. I would admire the pictures of the shoes in Runner's World magazine and couldn't wait to try them on my feet.

My first running role model was a local high school runner named Tommy Johnston. He was four years older than me and I would see him running through my hometown of Falmouth on long training runs when he was in high school. I started running in ninth grade weeks after the first ever Falmouth Road Race. Tommy finished in 10th place in that race back in 1973. That fall he went off to run at Wheaton College in Illinois and I started running with his brother at Falmouth High School. As a footnote, I also ran at Wheaton College four years after Tommy and it took me until my last collegiate cross-country race before I finally beat his best time over the 5 mile distance. I don't recall ever running a step with Tommy in my life, but I do recall him showing me a new pair of running shoes that he had ordered from a new company in Oregon called Blue Ribbon Sports. They were a pair of Tiger shoes with that silly Nike swoosh stitched on in place of the Tiger stripes. I wonder how much that pair of shoes would be worth today if Tommy had kept them.

I sold a bunch of my old Nikes on eBay years ago and made some nice money for getting rid of my junk! My wife was very happy, but mystified as to why someone (most were sold to people in Japan and in Europe) would pay for my old sneakers!

But then you have guys like Lindy Darrel, who is a collector of vintage Nike shoes who just love the glory years of Nike. I recently found this interview with Lindy and and his shoe collection as well as wonderful photos of some of the classic Nike shoes from that period of time including some that I had never heard of before. You can read the interview here. It is on a website called Sneaker Freaker.

There is a slideshow on the interview page that has marvelous pictures of some of the pristine shoes in Lindy's collection. I see some of my favorite ever racing shoes in his collection: the lime green waffle racers, Oregon Waffles, the America Eagle racing shoes, and Nike Mariahs (in team colors-Nike used to send special team colored versions of their shoes to top racers and teams- the North Central College guys seemed to get a lot of these as well as our own Danny Henderson. I still have a pair of his old spikes that were handed down to me and which look exactly like the 1973 Americas in one picture- except mine still have some Illinois mud caked onto them). Then there is a pair of the 1980 Nike Eagle- probably the lightest shoe I have ever worn. Nike needs to bring back the American Eagle and the Eagle shoes. They were such great racing shoes. There are also pictures of the old Waffle Trainers. Nike did bring these back into production a few years ago and I got a couple of pair. The funny thing was I blistered in the same place as I did years ago when running in the originals. I don' recall how many pairs of these I ran through, but I used to kill them and my toes would be hanging out the sides before I threw them away. There is a picture of the Nike Terra TC, which Lindy says was a great shoe, but which was the first Nike shoe that I didn't like running in as I did not like the Phylon midsole. Then there is a picture of the Nike Sting, a shoe I always wanted, but never did get. I can only imagine what those shoes would feel like on my feet. Finally there is even a picture of the Nike pinwheel bag. I received that bag (in beige) one year for Christmas. I saw it once on eBay going for a large sum money, and wished I never threw mine away. If you remember the old vintage running shoes, you may want to check out the article and pictures. After awhile your monitor will aquire that new sneaker smell! As you can imagine, one of my favorite parts of being a runner is the shoes. Now you know a bit of why my wife calls me Imelda! 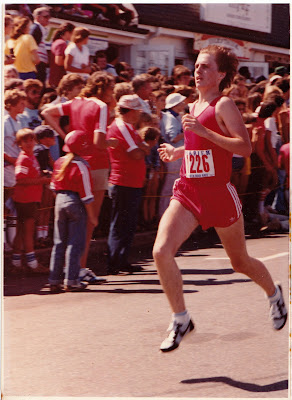 Here I am flying to the finish line of the 1980 Falmouth Road Race wearing a pair of Nike Eagles. They were so light I was going airborne!

I saw your SofS post before mine. I saw your photo: Falmouth + All-Alone + two-digit number = impressed. Good luck in the new year (but not too much if you come down to NYC).

While I am a contemporary of yours (HS class of 1974), the only Nikes I ever wore were some pairs in the 80s. Otherwise it's been essentially Tigers/Asics and adidas racing flats (my club had a sponsorship deal and I got a free pair) before and since. My first running shoes were those really thin blue Tigers that our coach gave us. They were like $10. And for spikes we had adidas. A bunch of us were size 11 so we'd pass around the same pair, which was a strategy that didn't work so well in cross.

We never had a Nike missionary and although we adored Pre it never occurred to us to wonder what shoes he wore.

(Speaking of falsely-labeled shoes, I recall Mike Schmidt being caught wearing a pair of Asics onto which a Nike swoosh had been placed.)

Hi Joe,
I think that was my fastest Falmouth ever, but it was just barely under 40 minutes so don't be too impressed! I remember those blue Tigers (Pintos?). I never had a pair, but our two best runners (both New York State champions) wore them all the time!
Jim

Hey Jim! Great blog...I too am afflicted with the old Nike nostalgia. I'm HS class of 1977 and our XC team all had the Tiger Pintos, except me...I had the Nike equivalent, The Marathon, I believe. And so it started. Next up were yellow LDVs and tan Daybreaks (one of my fave shoes ever.) I recently got a pair of the Daybreak reissues but other than looking awesome, they are a let-down...the insoles are glued in, hard and flat, not those super comfortable Perma-Foam jobs the originals had! I also lusted after the Sting like you but never owned a pair. Fave Nike of all time? The original Nike Air Huaraches. I just got the new Lunar Avant and love them...Take care!

I stumbled across your blog post because of my love of my old Nike Eagles that I got in the spring of 1983. My parents were very poor and they sacrificed and took me to a shoe store because I wanted to run track. We bought a pair of Nike Eagles solely because they felt good on my feet. I knew NOTHING of flats/trainers/spikes, etc. Because we were poor, it never occurred to me to wear any other shoe in practice. They were the only pair of running shoes I had. That would continue to be the case through five seasons of high school running (three years of track and two of cross country.) I wore that same pair of Eagles for every practice, meet, run at home, etc. for 3 1/2 years. I even wore them for my first few races in college cross country. The last time I wore them to race I wore through my socks very quickly and basically was running barefoot because the middle of the bottom had wore completely through. I never had trouble with my joints or knees, but at age 42 I think it is catching up to me! I still have those shoes but they are buried in a storage unit. Thanks for reminding me of those great Nike Eagles! (Nike should bring them back!!!)

I landed on your excellent blog when I was doing a "vintage Nike" search - looking for images of the old "there is no finish line" ad.

Today I'm contemplating the fact that it's my 33rd running anniversary. I guess the day I started (April 4, 1977 - one loop around the Central Park reservoir) was so monumental, it stuck in my head ever since.

Various nagging injuries ... undoubtedly the result of really stupid "training" way back when (compulsively running every single day no matter what - often when I was in pain - being too "macho" to allow for any recovery time, blah blah blah) derailed my "serious" running dreams a long time ago ... but when April 4 rolls around every year I start wondering if, at this late date, (this year I'm closing in on turning 59) I could ever get back to running some longer distances, like in the days of old. Not competitively, but just to get a small taste of the feel of it again.
I like your blog, thanks for doing it!
-Lisa

PS - I ran Falmouth in '77 - with a raging hangover (drove up there with a group of party-hearty runner friends) - and despite the hangover and maybe 2 hours of sleep - I managed a pretty respectable time anyway ... ah, youth!

Hi Lisa,
Thanks for the comments and for your 33rd anniversary with running. It is never too late to keep the dream alive. My post for today was "Hope Springs Eternal"...you know, once a runner-always a runner! I figure if we could run so well an easy when we were younger, then there must be a way to get the balance and stride back in some way. The hard part is finding what works!
Falmouth '77 was my 3rd Falmouth!
Best wishes.
Jim

Hi Jim,
I remember the Nike Stings on the back cover of Runners' World and like yourself I never got a pair but I did use an addidas racing flat in the 1980 Boston Marathon. They were pure white and three blue stripes. I used the old Sl 72's to train in and then the TRX came out as an upgrade. Back then the racing flat was like a minimalists shoe but they gave me toe blisters and they didn't last very long for the money you had to pay. Today I am a New Balance guy but any shoe works for me.

I completely agree, the Nike American Eagle was my all time favorite running shoe, and if they'd bring it back, I'd be a loyal buyer for the rest of my life, I used to train in them, race in them, and just go out hard and fast for fun - I truly loved that shoe - I loved the name, the lightweight, the bounce, they felt like bouncing slippers, amazing what I could do in those shoes!

Ran track in high school 35 years ago and these were my favorite running shoes of all time wore them until they had holes on the sides bring them back Nike.