Flossing Your Nerves: That Tight Muscle Might Actually be an Irritated Nerve 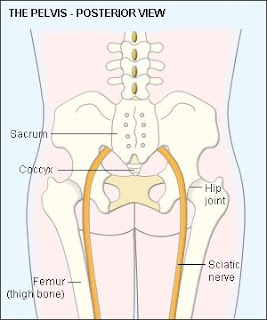 When I bought the book Run for Life: The Injury-Free, Anti-Aging, Super-Fitness Plan to Keep You Running to 100 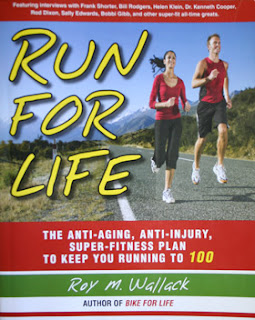 I have come to the opinion that there are two types of runners: the biomechanically gifted runner and the runner who for some reason is imbalanced and suffers a multitude of running injuries. I think the biomechanically gifted runner runs with the same stride pattern and movements, however the biomechanically challenged runner has a body and running form that changes as it meets stressors. The gifted runner gets the typical running injuries that are easy to diagnose and remedy. I do not think that this runner is injured less, as they do stress the muscles, joints, and ligaments in the same way with each run. However the "challenged" runner's body adapts as it goes. If a twinge is felt somewhere, they change the stride or thier posture. Due to this or because of this their body gets out of balance and then it is continuously making new adaptions as it tries to find a way to run pain-free. Eventually you get all out-of-sorts (like me) and your body completely loses the plot on how to run correctly and move correctly.

I also think there are two types of running books: the books that keep rehashing the same formulas and stretches and the books that go beyond to find alternative and unorthodox ways to keep an out-of-balance runner running. There are plenty of books in the first category and very few in the second. I would place Run for Life

in the second category as a book that very much goes beyond the traditional thinking to help the runner (and there are more of us out there) who keep running even when their running stride and injury patterns tell them it is time to give-it-up! 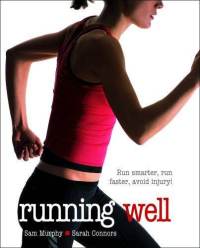 even though it looks like a book that belongs in the typical running book category. It is slick, has nice color photographs, and is printed on nice paper. Compared to
it looks a lot nicer! Run for Life

is printed on paperback book style paper, its black and white photos are not clear, and their are misspelling galore (I keep finding more). As a teacher, it reminds me of a kid who turns in a paper that is a bit sloppy but is very interesting and enjoyable to read as opposed to a student who turns in a fluff paper but it is neat and just looks "perfect" but a bore. There were some things in "Running Well" that caught my eye, so I decided to buy it, use up a gift card, and look at it later.

It is glossy and covers everything that a running book "should", but I liked some of the stretches and strength work and I also saw a couple of pages on something called "nerve flossing". I have read a wee bit about this last year and even bought a computer cd called "Run" from Humanlabsports in England that I only paid attention to a few times as it was a lot of glitz to get to a few stretches. It did incorporate nerve flossing in with the stretches.

The idea with nerve flossing is that your nerves can get inflamed or traumatized because of poor biomechanics, injuries, or imbalances. They will get sore and can affect your range of motion or mobility. Most runners are familiar with the sciatic nerve. Another nerve important to running is the femoral nerve. You don't stretch nerves like a muscle, but you can do something called "flossing the nerve". You use a slight tension to "mobilize" a nerve. Then you move around the tension to floss the nerve. This supposedly loosens the connective tissue around the nerve.

Here is an example of nerve flossing for the sciatic nerve. This is similar to what is on the "Run" cd and a little different than how it is portrayed in the Running Well

Here is a video with more explanations, particularly geared for someone with piriformis syndrome.

re piriformis, see what you think of this guy's ideas:

Hi Chris,
I do have Monte's book lying around somewhere. I got it a few years ago. Interestingly enough, just yesterday I recieved the new issue of Runner's World and author-runner Ben Cheever had an article about an injury that nothing would fix until he went and visited John Sarno and used his ideas. It made me think. I like your blog, I'll have to check it out more.
Jim

Hi Jim - I found you via Matt's blog. You have some good stuff here

Hi Jim,
Have you heard of Structural Integration or Rolfing?
Through my experience with Rolfing I found that I was in fact more "biomechanically gifted" than I ever realized. Once everything is put in it's proper place (the Structure is sound), the improvement in the Function is astronomical. I was always the "challenged" runner or athlete that you describe, but after I completed the 10 sessions of Structural Integration I felt like Michael Jordan...Unstoppable!
I cannot endorse it enough, a totally mind blowing experience that completely changed my life!
John Rainbolt
Tallahassee, FL
johnmrainbolt@yahoo.com

Hi John,
Yes I did go through 11 sessions of rolfing. With me, it felt great throughout the process, but I fell apart within months of the last session. http://recoveryourstride.blogspot.com/2008/03/rolfing-can-it-help-your-running.html
Someone commented that it could be because I was running during the seesions. I think that it had to do with the Functional Hallux Limitis that I recently was diagnosed with and this kept me in familiar bad patterns of movement.
http://recoveryourstride.blogspot.com/2010/06/functional-hallux-limitis.html
I am glad it worked for you so well. I am wondering if a "touch up" appointment might be in order at some time, if I find that the insoles do help my stride and mechanics.
Jim

What happens if you cannot stretch a leg outright? My hamstring is a huge issue despite foam rolling the area. I cannot straighten it out.