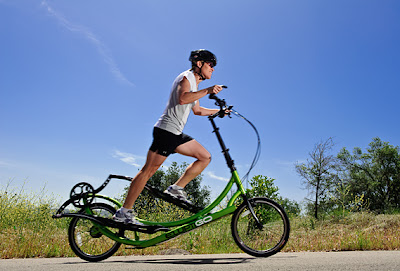 UPDATE: I bought a new ElliptiGO and I am thrilled with the purchase!
After 10 weeks of ElliptiGOing, I have accumulated a total of over 1500 miles. I do not get the joint pains  that I was getting when I tried to run post hip surgery. Sure, it is expensive, but I am selling stuff on eBay to pay it off and it is the best purchase that I have made in years. Make sure, if you are serious about getting one to get at least the 8 speed model. You can see many posts I have made about the ElliptiGO, but here is one on how I did a 104 mile hilly century (8000+ feet of elevation after only 6 weeks on the ElliptiGO). Here is a post about the first ElliptiGO race on the east coast. I was fortunate enough to win it and I hoping to see many other races pop up as it was a total blast. I give the highest recommendation to the ElliptiGO. I haven't had so much fun exercising and being pain-free while doing so in years.


This is a serious post. I am hoping that maybe someone with a used ElliptiGO is looking to sell it for some reason or another. I would be interested in hearing from any such people. The news I am getting this week about my hip is not good. I tried one of these at the Boston Marathon Expo and enjoyed the running motion (it was only on an indoor trainer), but it felt natural and easy unlike the feeling I get an elliptical machines. Last week I signed up for the first ElliptiGO race to be held in New England at the New England ElliptiGO Summer Classic. I am renting an ElliptiGO for the race. The race is only five miles, but the next day there is a 20 mile or so group ElliptiGO run. If my hip feels better, there is even a 5 mile running race soon after the ElliptiGO race. But that is not enough for me. I could see me doing this full time if I can no longer run.

While I am not hearing good news about my hip, I am hoping for the best (it is hard to believe everything you hear and whether it is the real truth), but I am not anywhere close to even running right now as I work through therapy. I do have a 5k race in Hollis next week that I will just jog through (a first)  and the Falmouth Road Race in August that I am signed up for (another jog and hopefully not my final Falmouth), but a small part of me is dreading the thought that those might be my farewell races to running.

I can ride my bikes, but cycling is what started this whole hip thing years ago and it does aggravate my back. I can also ride my Kickbike a bit. It is gentler than running, but I am not sure the pushing off and the positioning is best for my hip. If I had the money, I'd buy an ElliptiGO right away and start training as much as I can. That is the problem with the ElliptiGO. It is too expensive. However, if someone has one they are looking to sell at a good price, I would be very interested. I would put it to good use right away.

If someone has one to sell. contact me at marathonnh (at) yahoo.com or through this page. I do not mind the dorkiness factor. I would not let it sit idle in my garage. I would ride it 100 miles as soon as I could. I have done 127 miles straight (see Concord Monitor article) on a Kickbike and this looks to be a more gentle motion. My hip might start liking me for a change, instead of reminding me that I have put too many miles of running over the 40 years I have called myself a runner. I also like being at the beginning of fitness trends. I started running in 1973 at the beginning of the running boom, ran my first marathon in 1977 as that was taking off, completed my first Ironman distance triathlon in 1983, before fewer than 10,000 people had completed one. I got into bike racing before Greg Lemond won his first Tour de France and I got into kickbiking and snowshoe racing pretty early. I am still waiting for kickbiking to take off, but maybe I can be one of the first ElligtiGO racers, before all the other broken down running discover this new way to move and it gets more popular!

Here is an interesting video showing how similar riding an Elliptigo is to running featuring Ultramarathoner Dean Karnazes.

I am getting tired of sitting on my butt. This looks like the next best thing that is similar to running that I can find. If you are interested in selling a used ElliptiGO and this post is still up, then I am still interested in talking with you.
Posted by Jim Hansen at 6:41 PM

I splurged and bought an EliptiGo last year. I have a lengthy running injury history like yourself and am trying to recover my own stride. I love the EliptiGo. It is the closest thing I have found to running. I have a road bike, but I get a much better workout in much less time and enjoy it more. Plus, I get all kinds of strange looks when I ride it! Good luck finding a used one; you'll love it.

OK that is great to hear, Steve. Thanks for the feedback. Strange looks would be fine with me. I just want to move, feel good, and have fun!

I just bought an Elliptigo two weeks ago and absolutely love it. I am a runner and use it for cross training. My boyfriend is addicted and plans to purchase one for himself too. Definitely an investment, but a worthwhile one. I agree that the workout is better and more intense than riding a bike. Just compare by using a heart-rate monitor and that will become very clear. I haven't read your entire blog, but now that I have stumbled upon it, I plan to do so.

Welcome to the club, Lynn. You will love the ElliptiGO. I would be curious as to how the ElliptiGO will improve your running over the coming year.

I would love to buy a used elliptigo. Anyone know of one or want to sell theirs? The price in South Africa is beyond my means and I would really love to get fit this way, allow my dog to run next to me and not fear to fall off!Hester

Was just told my knee is bone on bone and having a hard time bending,getting up a curb just getting up. But saw this and would love to get one used also.

Hi Jim,
I am the guy who pulled you over on Wheeler road and spoke with you. I had my surgery on my knee in December and can't run for the next year.... I am going to get an Elliptigo 8c this spring.... Can't wait. Thanks again for letting me try it!

Oh awesome! I could tell you "got it" and really liked the ElliptiGO! I hope your surgery went well and you are on the road to recovery. You will love the ElliptiGO! If you are on Facebook, check out the ElliptiGO page. It is the closed group, but just ask for an invite. There is a lot of good information and people there and they will answer any questions you might have and provide motivation. Let me know once you get going and comfortable. We are starting to get some ElliptiGO riders in the area for some training rides.

I am saving for an elliptigo, I test rode one and fell in love. I tore my ACL a couple of months ago and I'm needing something easier on my knees. If anyone knows of any used ones let me know!

Tasha, someone posted a used one today on the Facebook ElliptiGO group. It is the "closed" group, but ask to join as that is where all the best information is to be found.

Hello,
I saw your post and I am posting as I have a used elliptiGO I am looking to sell. I am an injured runner and I only bought it in December. I agree it is a great training tool and I bought it with the stationery trainer but I am looking to sell as I have issues with a lumbar disc and was planning to use this indoors only, but the movement happens to aggravate my issues and I am actually better using a stationary elliptical trainer rather than the elliptiGO in the stationary trainer as it rocks a bit, which aggravtes the problematic lumbar disc I have and where I live isn't great for outdoor ellitiGOing. Unfortunately I was training through my disc problems and I only realised after the trial period ended so can no longer return the ElliptiGO, thus my reason for selling. It is in great working order still and I know it is a considerable purchase, but I am opne to reasonable offers for the ElliptiGO and the stationary trainer. Anyone interested is welcome to view and try before buying. I am a genuine seller so if anyone can help me with this or can put me in touch with anyone who is interested in purchasing and ElliptiGO who wants to make a saving on buying a nearly new ElliptiGO I would be very grateful. Thank you!

Morag,
There is a Facebook group for ElliptiGO enthusiasts. Look it up. It is the closed group. Ask to join and then you can have list it there. If it is priced right, it may sell. That is the audience you are looking for. Good luck. I know of one other person with back issues that was not helped by the ElliptiGO, although plenty of people have found it helpful. Here is the group: https://www.facebook.com/groups/276893119018686/

Hello Jim,
Thank you so much for your help! Yes it is a great machine - it's just unfortunate that it's not going to be an option for me :( I have requested to be added to the Facebook group so hopefully someone accepts me and I can post up soon and hopefully get some interest. Thank you so much again for your help Jim :) Morag

The best thing to do besides Craigslist is to join the ElliptiGO closed group on Facebook and see if someone is interested.