Recovering Children in Africa: Great Stories of Survival and Giving Back

I have always interested in the continent of Africa. All children enjoy the animals that grace that continent. My parents visited Africa when I was a child and I still have the African hat they brought back for me from that visit. As a runner I admire the great runners of Kenya and Ethiopia and consider Halie Gebreselasie to be my favorite athlete. Getting to know some of Sudan's "Lost Boys" through my sister's family taking in four boys has only heightened my interests in the stories and troubles affecting many people and countries in Africa. Recent news articles that I have read and music that I have been listening to tell the story of how some have escaped their horrendous pasts and achieved a new life full of achievements. They are also giving back to the children in home countries trying to make a better world for them to survive and live in. So here are some of the best stories possible from some of the worst childhood experiences imaginable. 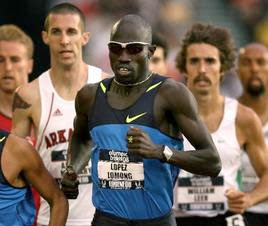 Lopez Lomong ran the 1500 meters in the 2008 Olympics for the United States. He was also selected by the United States athletes to carry the USA flag into the opening ceremonies. Lopez Lomong is one of the Sudanese "lost boys" who escaped the fighting in his own country by walking with other children to a refuge camp in Kenya. He came to America with other "lost boys" in 2001. My sister's family took in four of these Sudanese boys which was well chronicled in the Boston Globe. Their stories of survival, meager rations and little hope to escape their situation, and then the trip to America where they had to learn about a completely different culture and way of life are fascintating.

These "lost boys' embraced getting the opportunity to get an education and to work. Many of them are starting to make a mark in this country and on the world. Some even became exceptional collegiate runners: like Macharia Yuot and Lopez Lomong. A recent article on ESPN.com explains how Lopez Lomong recently opened a school in Sudan. According to the article only a shockingly small number of students complete primary school in Sudan,

"The primary school he opened in his village of Kimotong will increase access to education, something sorely lacking in Sudan. Only 2,500 children in the country of more than 7 million people complete primary school each year, according to
the New Sudan Education Initiative. Of that number, only 500 are girls."

"To be able to see a young girl showing up in the morning to go to
school, that just opened my heart," Lomong said. "I'd like to be able to do more
things and be able to get my people, my fellow Americans, to get involved."

Here is the video of Lopez Lomong making the USA 1500 meters team at the 2008 Olypic Trials.

Julius Achon is a two time Olympian for his native country of Uganda. He is also the 1996 NCAA champion in the 1500 meter race. He currently works with Alberto Salazar's Elite Nike Project in Portland, Oregon. He uses his salary to support orphans back in Uganda as well as his family. His uncle, John Akii-Bua, was the 1972 Olympic Gold Medalist in the 400 meter hurdles.

When Julius was 12 years old he was abducted from his home and forced to become a child soldier by a rebel group called the Lord’s Resistance Army. The rebels drugged the children and forced them to kill, steal, and torture. Julius escaped after three months and rejoined his family. His running prowess enabled him to get a full scholarship to George Mason University in Virginia. His story is told here. Julius has a website achonacademy.com that descibes his charity, history, and career as a runner.

Here is a video where Julius tells his story.

Emmanuel Jal is not a runner (as far as I know) but he is an international hip hop singer. At the age of eight he became a child soldier in Sudan. Three years later he escaped and wandered for three months with about 400 other child soldiers to reach safety. Only less than 20 of these "lost boys" survived the journey. He was later rescued by a British aide worker named Emma McCune, who smuggled him into Kenya but died in a car accident less than a year later. Friends helped pay for him to continue his schooling. He now sings about his life and the world he lives in from the peculiar point of view of his own history as a child soldier. I have been listening to his music the past two weeks and greatly enjoy his cd "War Child".

If you want to learn more about what I have learned about Emmanuel Jal and his music you can check out my music blog Sing-a-long Songs as Scriptures" right here. Emmanuel Jal is also setting up a school for children in Sudan. You can find out about Emma's Academy here.
Posted by Jim Hansen at 2:36 PM

Salazar and his Oregon Project need more scrutiny from the media:
Here is a Youtube link that explores some of the problems relating to "altitude training":
www.youtube.com/luddite333