I enjoyed reading Meb Keflizghi's biography Run to Overcome: The Inspiring Story of an American Champion's Long-Distance Quest to Achieve a Big Dream.

Since getting a Kindle

for Christmas I have been reading up a storm, but I didn't have a Kindle version of this book, I had a hardcover copy so I had to put down the kindle and start turning pages again. This book is written in a pretty straightforward way and you feel as if Meb is talking to you as you read. I was caught up in finishing the story and it took just two nights of reading. While I am familiar with Meb as a runner, this book tells you more about his heart.

It is takes you through his life: born in war torn Eritrea, through his father making his way to Italy so his family could later follow. Then the trip to California where Meb and his siblings excelled in school and sports through hard work and determination. I knew all about his running accomplishments, but it was good to read about the people and circumstances that helped make him a champion. The book covers a lot of ground, but there were few surprises or dramatic narratives as the story winds its ways through Meb's life and running career. It does highlight his relationship with Ryan Shay, the American marathoner who died in the first miles of the American Olympic Marathon trials and Meb's major hip problems and recovery after that race.

It is a positive story that leaves you uplifted about how family, values, faith, and hard work can pull people to the pinnacle of success and then to the very top. I would have wished to learn more of his life in Eritrea. Meb puts a positive spin on many things and I don't feel like the hardships were portrayed fully. I think my favorite chapter was the one chronicling the courtship of Meb and his wife. Meb is a pretty steadfast guy and if his courtship seems old-school and outdated then I think it should be assigned reading to young people if they want to find the key elements of what makes a successful marriage relationship. The chapter reminded me about the section in the wonderful Disney biopic Endurance

where Haile Gebrsellasie goes on his first date with his future wife (both are acting as themselves in the movie) and they hardly know how to start talking with each other, but they are obviously in awe over the other person. 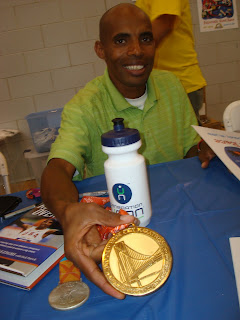 Meb proves in his book, life, and running that his is a person of strong character and convictions. I met Meb at the Falmouth Road Race this year and appreciated the short conversation I had with him. I admired the fact that he willingly shared and let fans touch his Olympic silver medal as well as his gold medal for the 2009 New York City Marathon. I was surprised at the race (Meb did not run due to illness) when after finished, a friendly face appeared at the finish line with extended hand offering congratulations. Meb was greeting the runners as soon as they finished.

Meb's website is called Run to Overcome. You can find more information on Meb and his book and there is still a chance that you can daily win an autographed copy of his book on the site (until Feb. 11). That is how I got my copy!


Meb in the Athens 2004 Olympic Marathon, where he won the silver medal. This is exciting even if in Italian. Stefano Baldini of Italy finished first, Meb was second, and Venderlei de Lima of Brazil was a triumphant third after being attacked and tackled by a crazy fan on the course.

Thanks for mentioning the contest at Meb's website. I entered after reading your blog post and I was the January Grand Prize winner! I look forward to reading his book.

I appreciate the time you put into your blog. I am another long time runner trying to recover my stride. I am currently slowly building back up after a stress fracture in my left tibia. Good luck to your ongoing quest to recover your stride!

Hey Steve,
I didn't even realize that they gave a monthly grand prize. Checking out the contest, you got some nice loot there to go along with the book! Congratulations, that is very cool! Enjoy the story and I am sure your recovery from the stress fracture feels a whole lot better right now. Thanks for letting me know that you won after reading about it here and for your comments!
Jim