Gun Runners: A Story about Friends, Guns, and Running 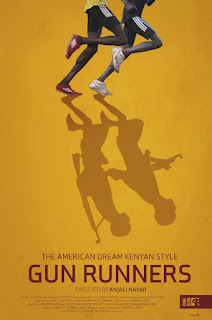 From the National Film Board of Canada:

When it comes to world-class marathon runners, Kenyans are considered the cream of the crop. Particularly those from Kenya’s Rift Valley. These athletes have won marathons in London, New York and Berlin, and have set countless world records. But some of Kenya’s top runners aren’t running for fame and fortune. Some are wanted warriors, running for their lives. For years, Julius Arile and Robert Matanda thrive among the roaming bands of warriors that terrorize the North Kenyan countryside. By the time they reach their mid-twenties, stealing cattle, raiding and running from the police is the only life they know. So when both warriors suddenly disappear from the bush, many of their peers assume they are dead or have been arrested. Instead, they trade in their rifles for sneakers—in the hopes of making it big as professional marathon runners. Years of fleeing from the police have prepared the men for running marathon distances, but do they have what it takes to overcome the corruption, mistrust and jealousy that threaten to derail their careers? Or will they give up on their dreams and return to a life of easy power and money? Told entirely by its central characters, Gun Runners is the American Dream, Kenyan-style.

From the Toronto Film Scene: 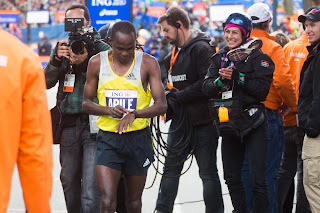 Gun Runners is an inspiring and incredible story which follows two notorious warriors and former cattle rustlers in Northern Kenya who give up their weapons to run in marathons. As part of a government sponsored program to disarm in conflict heavy regions, these once notorious warriors are given a chance to pursue their dreams of becoming professional marathon runners.
The film follows Matanda and Arile, who are looking to put their violent pasts behind them and pursue a positive path that will benefit the future of their family, livelihood and this conflict ridden region of Kenya. The audience is guided through a linear progression of events and sees Arile enter international marathons, while Matanda gets involved in the political sphere and dreams of working towards policy change.
Anjali Nayar directs a thoughtful and memorable story about leaving violent conflict behind to pursue personal passions. The documentary is set in Kenya’s picturesque Great Rift Valley which is a noted area for international arms trading and marathon running.
Gun Runners gives a face to the complexities and personal struggles in war and conflict, yet becomes an inspiring story of self perseverance in attaining a greater sense of self.

This touching and poignant film follows two of the most notorious warriors and cattle rustlers in Northern Kenya who trade in their weapons for sneakers, as part of a government-sponsored program, to pursue their dream of becoming professional marathon runners. Filmed over eight years, Matanda and Arile face financial challenges, fierce competition and family pressure as they struggle to put their violent pasts behind them. A lot is at stake for both of them, and the whole world is watching. Set in Kenya's astoundingly beautiful Great Rift Valley, an area famous for both its international arms trade and its champion runners, and told entirely from Matanda's and Arile's points of view, Gun Runners puts a face on a nation's valiant attempts to embrace both tradition and modernity. Lynne Fernie


Here is an a longer favorable review.