I had another "recovery" week with only two runs for the second week in a row. My calf-soleus area remains a bit tight. I ran Tuesday, with a bad cough and somewhat of a limp to protect that tight area. I did not run again until today. Thankfully, the cold is finally gone, and I could run without trying to protect the calf, but I could still feel the stiff area. Hopefully I can continue to run daily again, only four runs in two weeks is not doing it for me.

Have you ever seen the movie The Long Green Line? It is about Coach Joe Newton and the powerhouse York High School cross-country team. It is an interesting film for those who like to see inspiring coaching and high school cross-country running. We got it from Netflix and it is worth the rental.

I loved running cross-country and here is an old cross-country team photo I found online of the 1974 Stony Brook School cross-country team. I was a sophomore and it was my first year living away from home. I started running my freshman year at Falmouth High School. Stony Brook is a small (about 350 students in grades 7-12) college prep school. Although we were a small school, we had a supurb-running program with some great champion runners (history here). We also had one of the greatest cross-country coaches you could ever find. Marvin W. Goldberg earned respect throughout our school and New York State and was a thorough, precise, and caring coach. Although many of his runners became state champions and earned college scholarships for their running abilities, he was more interested in developing strong men then champion runners. Mr. Goldberg knew his running inside and out. Every workout was part of a larger plan and based on Arthur Lydiard's ideas. He found just the right hills, forest pathways, and interesting running routes for us runners. We had a cinder track for intervals unless he found another location for timing our runs. We received notes during the summers encouraging us to train and he sat down and developed long term and season goals for each of his athletes. He hauled out G.I.T. (Goldberg's Iced Tea) after workouts and he was a splendid student of the sport. His chapel talk on watching the Boston Marathon and especially his descriptions of the wheelchair athletes climbing Heartbreak Hill are still etched in my mind. His trip to Eugene, Ore. in 1976 to watch the Olympic track trials is another memory. 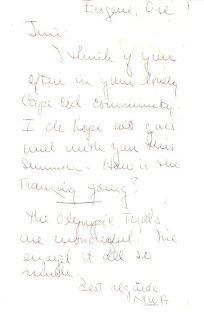 The last time I saw Mr. Goldberg was at the one-mile mark of the Falmouth Road Race sometime in the early 1980s. I was running up Nobska Hill and saw his leg, looked up in surprise and yelled hello, and continued with the race. There is a book written about the lessons learned under Mr. Goldberg's coaching called A Resilient Life: You Can Move Ahead No Matter What

by Rev. Gordon MacDonald, a Stony Brook runner long before I attended. Here is a small article based on that book. When President Clinton got himself into a lot of trouble as president, Rev. MacDonald was one of the ministers called upon to be his spiritual advisor.

"Gordie, I think you have potential," Coach said. "But you'll have to discipline yourself. You have to trust me and follow my instructions. Every day you must complete the workouts listed on this board. Don't commit to this if you are not willing to give it everything you have."

Each weekday Coach stapled up on that board individual training programs for every member of his team, signed MWG, his shorthand for Marvin W. Goldberg.

"Gordie, are you willing to pay the price it takes to become a Stony Brook trackman?" he asked.

Coach Goldberg did not just oversee me as a runner; in fact, he did not always pay me the attention I would have liked. I loved running, but was not that good. On the other hand, he saw potential for other things in me. After one year at Stony Brook, I was supposed to return to Falmouth High School. He called me one day during the summer to see how my running was going and talked to my father instead. He found out I was unable to return. That phone call started a series of events that enabled me to return to Stony Brook in a miraculous way. Without his concern, I would never have been able to return. At the beginning of my senior year, the Wheaton College (Illinois) cross-country team made an east coast trip At first they landed in Falmouth (Tommy Johnson was a member of the team and the first cross country runner I ever knew and he was from my hometown of Falmouth, I went out for the Falmouth team in ninth grade with his brother and my friend Stu) and then they traveled to Stony Brook (almost like they were hunting me down). I sat at the dinner table with the Wheaton cross-country coach and Mr. Goldberg that night. Mr. Goldberg talked me up greatly to the coach and talked the school up to me. The next year I was running for Wheaton College (although under a different coach). I believe Mr. Goldberg helped prime the pump for me in that regard too. Although I was always disappointed that he never quite realized how much I loved running even though I wasn't a star, I think he made sure the best things happened for me, because I was one of his runners! I still remember the day he called me over after a rough workout in which I really struggled and he put his arm around me and said, "Jim, one day you can be a very good runner!" and then he told me about the potential he saw in me.

In the photo:
bottom row (left to right): Larry Swanson, Sr. (died in a tragic water skiing accident a few years after high school), Don Lockerbie, Sr. (top collegiate 1000m runner at UNC, runs a company that builds sports stadiums, I think I read that he set the bike and marathon courses at the 1996 Atlanta Olympics. His dad was a teacher at Stony Brook and almost a Canadian Olympian in track, but what impressed me at the time was that he sometimes ran with us B level runners, which I found remarkable at the time because he was over 40 years old! old guys didn't run then) Bob Levorchick, Sr., Doug Alexander, Sr. 2nd row Brad Bright, Jr. (also ran x-c at Wheaton College), Dave Seyfert, Jr., Scott Dodd, Soph. (really a top New York state wrestler, hurdler and high jumper) Mark Whitney, Fr. (top NY state runner- 4:16 hs miler, state champion- Winner L.I. Marathon and ran for UNC- also older brother to Andy, 9:06 hs 2 miler, state champion, and ran for William and Mary, and older brother to Laura Whitney Bianco, a third family state champion, Kinney x-c finalist (now Footlocker), still has one of the fastest hs girls times at Van Cortland Park, and a Gate City Strider - at least in the past- haven't seen her this year- the one year she put some effort into her running she won the overall female title at the Applefest half-marathon). Top row: coach Marvin W. Goldberg, Bill Hobbs, fresh. (the team's Woody Allen- funny guy!), Peter Ljunquist, soph., David Ribbe soph. (only year he ever ran x-c but also attended Wheaton College with me, met David on the first day at Stony Brook and found out our dad's knew each other at the same age, and David's grandfather was very influential in my dad's life!), the little guy on the end is me as a sophomore. I finally made varsity at Stony Brook as a senior and by the state meet was fourth runner on the team and the top senior. We finished 3rd as a team in the state meet, which I believe is Stony Brook's top team finish ever, but went largely unrecognized as they thought they'd do better the next year when they didn't lose any runners of note from the team! They did not.

Tom Harrison, Brad Bright, and myself all continued running at Wheaton College.
Posted by Jim Hansen at 1:05 AM

Mr Goldberg was my track coach 1980-82. I can't agree more with what you said. He put me through the hardest workouts of my life. My reward was the satisfaction of knowing he inspired me to give my all.

Well said. Were you a student while I was there (graduated in 1977)?