"Unbroken" - Never Give up!

In 1977 I graduated from the Stony Brook School on Long Island. The commencement speaker was the Rev. Billy Graham (his son Ned was a classmate). I don't remember much of Billy Graham's speech, but I do recall his final words," Never give up. Never Give up. Never. Never. Never," (although the "never"s sounded more like "nevah"). Those are great lines and through the years I have remembered them. Fortunately my struggles in life have not been too dramatic and I have only resorted to using Mr. Graham's words in situations involving athletic endurance and health.

There is a bestselling book out now, that epitomizes these words of Rev. Billy Graham. It is the remarkable life story of Louie Zamperini told in Laura Hillenbrand's book, Unbroken: A World War II Story of Survival, Resilience, and Redemption.

Louie grew up a juvenile delinquent in California. In high school he became a runner and turned his future around. He set the high school mile record and ended up at the 1936 United States Olympic Trials as a teenager. He earned a berth on the team to Berlin by finishing the 5000 meter track race in blistering heat tied with world record holder Don Lash. In Berlin he made it to the finals and in a remarkable final lap made up tons of ground to pass many runners and finish eighth. His final last lap of 56 seconds caught the attention of Adolf Hitler who asked for a private meeting. 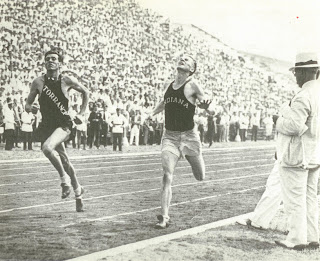 This book isn't really about Louie Zamperini's running career, although a case could be made that Louie was on the fast track to possibly becoming the world's first sub 4 minute miler. The mile was his race, and that final 56 second lap was 3-4 seconds faster than the world's best milers were running in the final laps of their mile races. Louie did go on to set a collegiate mile record that stood for 15 years.

World War Two was looming and Louie joined the United States Air Force where he became a bombardier. After flying numerous missions his plane went down due to mechanical failure and he survived 47 days at sea in a small life raft with one other man (the record prior to this for life raft survival was 21 days). He was rescued by the Japanese Navy and sent to prisoner of war camps were he was subjected to unbelievable cruelty. Meanwhile he was considered dead back in the USA. One particular guard, "The Bird", tried to break Louie with constant pummeling and hatred. It was remarkable for Louie to continually face such outrageous treatment, hunger, and conditions to survive.

He did, however and returned to the United States as a war hero. He thought he could go on with his life, but his demons caught up with him and nightmares of "The Bird" sent his life into a downward spiral. A speech by a young Billy Graham helped bring Louie to his senses where he learned to find peace, forgive his captors, and bring his life back in order.

This was a wonderful read that was masterfully written by Laura Hillenbrand, who  also wrote Seabiscuit: An American Legend

. It was the first book I read on my new Kindle,

I found the Kindle experience to be a great way to read a book and I was engrossed in the text for the past two days. This is a must read book and I must say I now have a much better idea of what Billy Graham meant when he said, "Never give up. Never give up. Never. Never. Never." He could have just told us the story of his friend Louie Zamperini. Maybe he did. I just can't remember.
.
Here is a 4-part series on the Life on Louie Zamperini (maybe you saw this years ago on CBS during Nagano Winter Olympics).

Beware! While﻿ the volume of this video is﻿ on the soft side, the is FULL VOLUME WHITE NOISE at 9:26 that could blow your speakers.


Includes CBS interview with "The Bird"

November 2010 Wall Street Journal article on Louie Zamperini and author Laura Hillenbrand, who is a prisoner herself in her won way due to Chronic Fatigue Syndrome: The Defiant Ones

This was a great post. I will add "Unbroken" to the list of downloads for my new Kindle. I have never forgotten Billy Graham's speech to your class - (I was there as Rachel Downing's "family.")

Thanks Laura,
I couldn't put the book er Kindle down. If you were Rachel's family did you have to speak in a British accent that day? She would be pleased to know that my wife was British until a couple of years ago. She did leave England when she was about 2 with her family, so she has no accent.
Jim