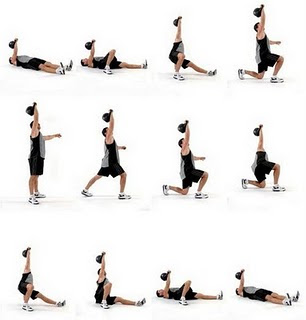 Below is a video of Gray Cook, that I saw last night. In it he explains the Turkish Getup as performed with a kettlebell. I think his speech is just as important as the tutorial. I mentioned Gray Cook in my last post. What I didn't mention is that I started my real search to try to improve my running mechanics and posture about 7 years ago after I read a Boston Globe preview of his book "Athletic Body in Balance Book.

It did not come with the DVD when I bought the book. Maybe that would have helped! The reviewer raved that this book had saved him from imbalance injuries. I couldn't wait for the book to be published and when I got a copy, I couldn't figure it out at all. It just seemed too complicated. I need to look over the book again with fresh eyes after all I have learned in the past couple of years, but that book has led to new ideas and principles that Gray Cook and other trainers keep building upon and I think that a lot of that building up and sharing of ideas amongst the top trainers has finally led to a a PT finding a solution to my running and postural imbalances.

Anyhow, in the video below, Gray Cook answers the question, "What is the best free weight exercise  you could ever think of if you could only do one?" His answer is the Turkish Get-up. This goes back to the idea that the body is a stack of joints and that we should exercise the entire body as a coordinated unit rather than work just one muscle or joint at a time, particularly if you want your workouts to be movement based. The Turkish Getup with Kettlebells is such an exercise as I mentioned earlier here and here.

The get-up works and improves your posture, symmetry, core, flexibility, stability, low back-hip interaction, and tight hip flexors all in one series of moves. It is not just a stretch or a strength move designed in islolation for one part of the body. You do need to pay attention to the details and use your body correctly, however, otherwise you are training yourself to move incorrectly.

Gray Cook and Brett Jones have a whole DVD set dedicated to the get-up called "Kettlebells from the Ground Up: The Kalos Sthenos". It is sold through Dragondoor here. It is much too expensive for me, but I have considered getting it some day, but there is a lot of info in this free youtube clip. As noted in this youtube video,  "Kalos Sthenos" is the greek word for "beautiful strength" and is the word from which we get "calisthetics". Calisthetics these days refers to body-weight exercises, but it originally it referred to movements with weights like the getup. Here is an article telling more about Kalos Sthenos and this DVD. Gray Cook is involved with functional training and I think the get-up is used as a both functional assessment as well as a exercise to bring balance to the body and that is why they have a 2 DVD set on just one exercise.

If you haven't tried the Turkish get-up this video my prompt you to give it a shot. Don't worry about how much weight you lift, until you get the movement down.

And after running a total of 60 miles in the last 7 days including a rain-soaked run yesterday, I took the day-off from running today because of the constant downpouring of rain. It ended up being a good day for the TRX Suspension Trainer and some kettlebell work, including a bunch of get-ups, instead!
Posted by Jim Hansen at 7:38 PM